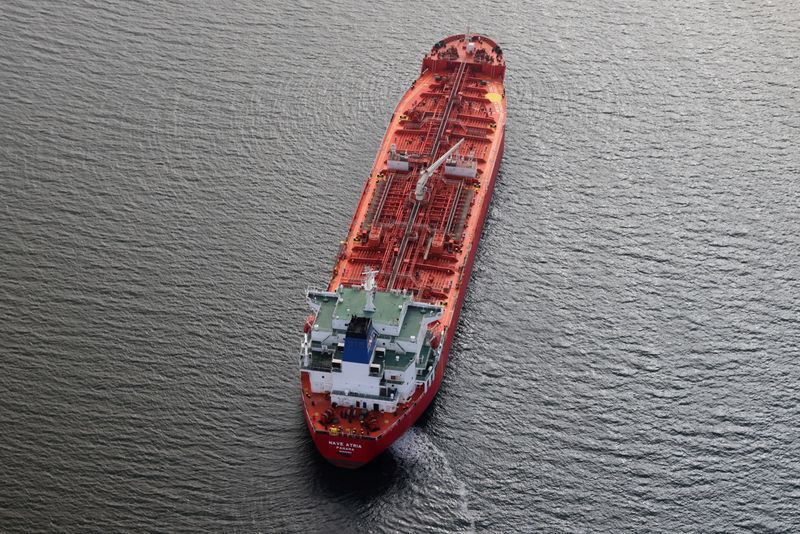 FILE PHOTO: An oil tanker waits in line in the ocean outside the Port of Long Beach-Port of Los Angeles complex, amid the coronavirus disease (COVID-19) pandemic, in Los Angeles, California, U.S., April 7, 2021. REUTERS/Lucy Nicholson/File Photo

By Laura Sanicola and Jessica Resnick-Ault

(Reuters) - Oil prices plunged $10 a barrel on Friday, their largest one-day drop since April 2020, as a new variant of the coronavirus spooked investors and added to concerns that a supply surplus could swell in the first quarter.

The World Health Organization has designated the new variant, which it named Omicron, as "of concern," according to the South African health minister.

The United States, Canada, Britain, Guatemala and European countries are among those to restrict travel from southern Africa, where the variant was detected.

U.S. West Texas Intermediate (WTI) crude settled down $10.24 on Friday, or 13.1%, at $68.15 a barrel, declining more than 10.4% on the week in high volume trading after Thursday's Thanksgiving holiday in the United States.

"The market is factoring in a worst case scenario situation in which this variant causes massive demand destruction," said Bob Yawger, director of energy futures at Mizuho.

Both contracts fell to a fifth week of losses and their steepest falls in absolute terms since April 2020, when WTI turned negative for the first time amid a coronavirus-induced supply glut.

News of the variant caused ructions in a market previously caught between producer and consumer nations.

"The biggest fear is that it will be resistant to vaccines and be a massive setback for countries that have reaped the benefits from their rollouts," said Craig Erlam, senior market analyst at OANDA.

OPEC+ is also monitoring developments around the variant, sources said on Friday, with some expressing concern that it may worsen the oil market outlook less than a week before a meeting to set policy.

Scientists have so far only detected the Omicron variant in relatively small numbers, mainly in South Africa but also in Botswana, Hong Kong and Israel, but they are concerned by its high number of mutations which could make it vaccine-resistant and more transmissible.

Drug makers Pfizer and BioNTech said if necessary they would be able to redesign their shot within 6 weeks and ship initial batches within 100 days.

South Africa's foreign ministry said it would speak to Britain to try to get it to reconsider its travel ban.

"Our immediate concern is the damage that this decision will cause to both the tourism industries and businesses of both countries," Foreign Minister Naledi Pandor said in a statement.

Oil prices rose early in the week as the Organization of the Petroleum Exporting Countries and its allies (OPEC+) suggested it could taper production in response to a strategic release from large consuming countries that are members of the International Energy Agency.

Such a release was likely to swell supplies in coming months, an OPEC source said, based on findings of a panel of experts that advises OPEC ministers.

The forecasts cloud the outlook for a Dec. 2 meeting when the group will discuss whether to adjust its plan to increase output by 400,000 barrels per day in January and beyond.

"OPEC's initial assessment of the co-ordinated (stockpile) release and the sudden appearance of a new variant of the coronavirus raises serious concerns about economic growth and the oil balance in coming months," PVM analyst Tamas Varga said.