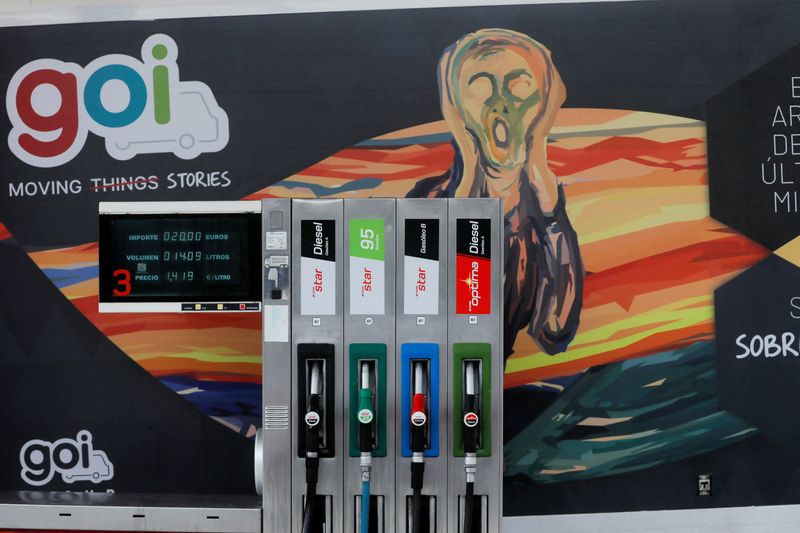 NEW YORK (Reuters) -Oil prices rose over 2% on Tuesday on concerns supplies could become tight due to Ukraine-Russia tensions, threats to infrastructure in the United Arab Emirates and struggles by OPEC+ to hit its targeted monthly output increase.

Analysts noted that oil prices rose despite a drop in equities markets and the possibility of an interest rate hike by the U.S. Federal Reserve on Wednesday. [MKTS/GLOB] [LIVE/]

"Energy traders donât know how the situation over the Ukraine-Russia border will unfold or if Iran will be able to reach a nuclear deal, but the odds are something wonât go right and that will likely lead to some supply shortages for the oil market," Moya said.

The United States is in talks with major energy-producing countries and companies around the world over a potential diversion of supplies to Europe if Russia invades Ukraine, senior Biden administration officials said.

Russia said it was watching with great concern after the United States put 8,500 troops on alert to be ready to deploy to Europe in case of an escalation in the Ukraine crisis.

In the Middle East, Yemen's Iran-aligned Houthi movement launched a missile attack on Monday on a United Arab Emirates base hosting the U.S. military. The attack was thwarted by U.S.-built Patriot interceptors, U.S. and Emirati officials said.

Also fuelling supply concerns is the difficulty encountered by OPEC+, which comprises the Organization of the Petroleum Exporting Countries along with Russia and other producers, with efforts to hit its targeted monthly output increase of 400,000 barrels per day.

In Iran, meanwhile, talks to revive a 2015 nuclear deal with Western powers were approaching a dangerous impasse, British Foreign Secretary Liz Truss said on Tuesday. Success in those talks could result in the lifting of sanctions on Iran and more barrels of Iranian oil for world markets.

Lower U.S. oil inventories are also providing support, with crude stocks at Cushing, Oklahoma, at their lowest for the time of year since 2012.

The market is waiting for U.S. inventory reports from the American Petroleum Institute (API), an industry group, on Tuesday and the U.S. Energy Information Administration (EIA) on Wednesday.