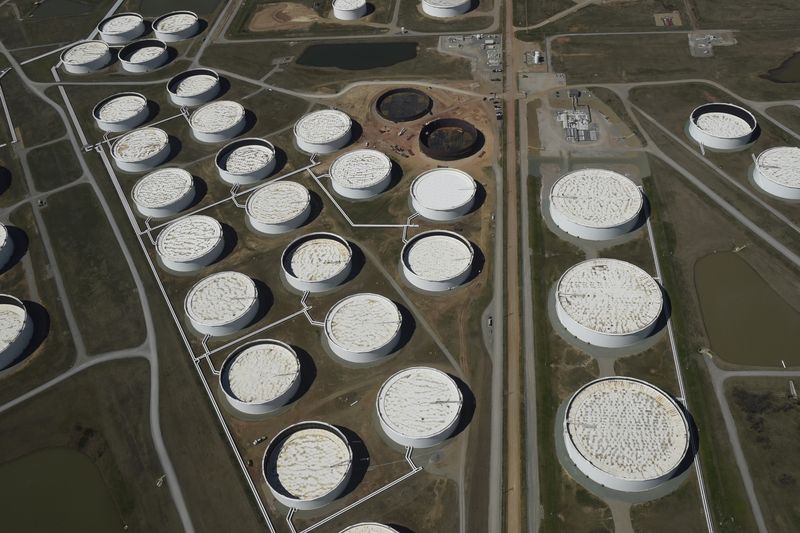 LONDON/NEW YORK/SINGAPORE (Reuters) - When the world economy slammed on the brakes last year, there was a rush to store a wave of unwanted crude and products, but rising prices and optimism about demand is spurring a swift unwinding of storage contracts.

At the end of February, the volume of refined products held on stationary tankers for over 10 days stood at 19.2 million barrels, down 77% from a peak of 84 million last May, IHS Markit estimates show.

The Organization of the Petroleum Exporting Countries and its allies, a group known as OPEC+, closely monitors global inventories, and the rate of drawdowns will be a major factor discussed when it meets on output policy on Thursday.

A year ago, traders were struggling to find storage capacity, and prices for it surged as fuel consumption plummeted. Earnings for product tankers surged to record highs above $100,000 a day last May versus less than $10,000 currently.

Remote salt caverns in Scandinavia and unused U.S. pipelines and railcars were pressed into service.

Brokers in the United States are also seeing lower prices offered for storage of crude and products.

"In January the unrelenting price run-up (in oil futures) commenced, and that scared people away who had been considering taking on storage positions," Ernie Barsamian, chief executive of the Tank Tiger, a U.S. terminal storage clearinghouse.

"We are now in full backwardation and we are seeing contracts expire without renewals," he added.

Backwardation, where spot prices are higher than for later delivery, encourages traders to draw down oil supplies and sell promptly.

In Europe, the six-month diesel spread reached $8 a tonne on February 19 in its biggest backwardation in 13 months, Refinitiv data showed.

The spread was as low as minus $92 a tonne last April, when the world population went under strict lockdowns.

Storage capacity is expected to become available in the second quarter, especially in Scandinavia, according to ODIN-RVB Tank Storage.

The six-month U.S. diesel futures spread reached 4.35 cents per gallon on Feb. 19, its highest since January 2020. At the start of last March, it stood at minus 3.2 cents.

The diesel futures benchmark on the New York Mercantile Exchange is also in backwardation. Diesel for April delivery was trading at around 0.5 cent per gallon more than for May. A year ago, it was in contango, trading at about 0.2 cent per gallon less than the May contract.

U.S. distillate inventories in the week to Feb. 19 fell to 152.7 million barrels, their lowest since the end of 2020, Energy Information Administration data showed.

While Singapore middle distillate inventories have surged to a 12-week high this week, analysts and traders expect a tighter market in coming months as regional refiners enter the spring maintenance season, and as demand gradually rises as COVID-19 restrictions ease.

"With less of an incentive to store, we would certainly expect to see a reduction in storage of diesel," said Kevin Wright, lead analyst for Asia-Pacific at data intelligence firm Kpler, which tracks oil shipments.

Global floating storage of clean products fell by 2.7 million barrels in the week to Feb 22, Kpler data showed, with most of that fall coming in West Africa and the Singapore Strait.

The front-month spread for the benchmark gasoil grade in Singapore has been in backwardation since the start of February, prompting traders to draw on stocks in storage.

Storage in the Middle East is also showing the same destocking trend, brokers said, though at a slower pace.

With some 100 million barrels of crude and products storage capacity, the Caribbean is America's largest oil storage hub overseas.