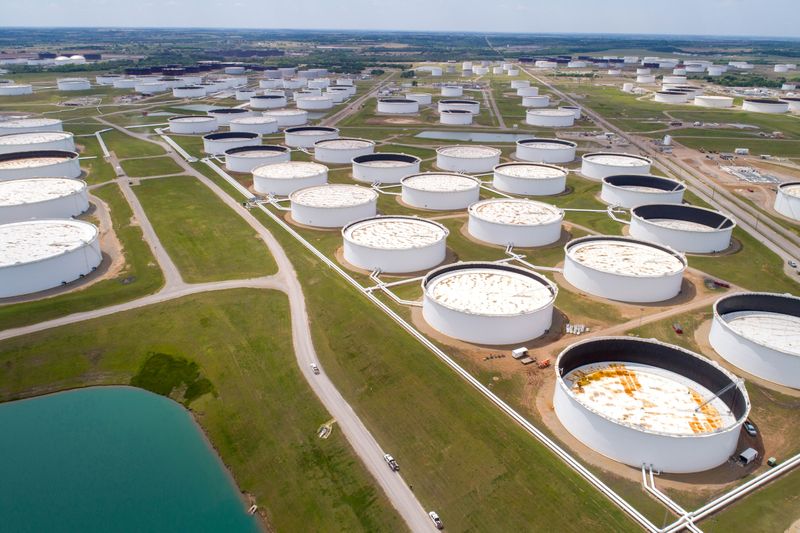 NEW YORK (Reuters) -Oil prices edged up to their highest in over two years in volatile trade on Thursday, on optimism for strong economic demand after new U.S. unemployment claims fell to their lowest since the country's first wave of COVID-19 last year.

The market shook off a brief plunge after media reports suggested the United States lifted sanctions on Iranian oil officials.

The U.S. Treasury later said it had removed sanctions on three former Iranian officials and on two companies previously involved in trading Iranian petrochemical products. A U.S. official told Reuters that the activity was "routine" and not related to talks with Iran over reviving the 2015 deal to restrict its nuclear weapons development.

Those were the highest closes for Brent since May 2019 and WTI since October 2018.

The number of Americans filing new claims for unemployment benefits fell last week to the lowest level in nearly 15 months, while consumer prices increased solidly in May as the pandemic's grip on the economy continues to ease.

"The recent unemployment and labor data published in the (United States) are a definite positive sign that the recovery in the country is speeding up," Louise Dickson, analyst at Rystad Energy, said.

"More business activity means more energy consumption, and a better economy is a needed prerequisite for road and air traffic to increase."

The Organization of the Petroleum Exporting Countries said oil demand would rise by 6.6%, or 5.95 million barrels per day (bpd), this year. The monthly forecast was unchanged for a second consecutive month.

"Oil prices are still grinding higher. The demand outlook continues to strengthen and supplies are not necessarily keeping up," said John Kilduff, partner at Again Capital LLC in New York.

Kilduff noted, however, that the market was "priced to perfection in relative tightness," and said Thursday's brief midday price drop shows what can happen if Iran or OPEC+ add more barrels to global supplies.

OPEC+ is an alliance between OPEC and other producers including Russia.

Analysts have said Iran could provide about 1 million to 2 million barrels per day (bpd) in additional oil supply if a deal is struck and sanctions lifted.

(Additional reporting by Julia Payne in London and Jessica Jaganathan in Singapore; Editing by Marguerita Choy and David Gregorio)