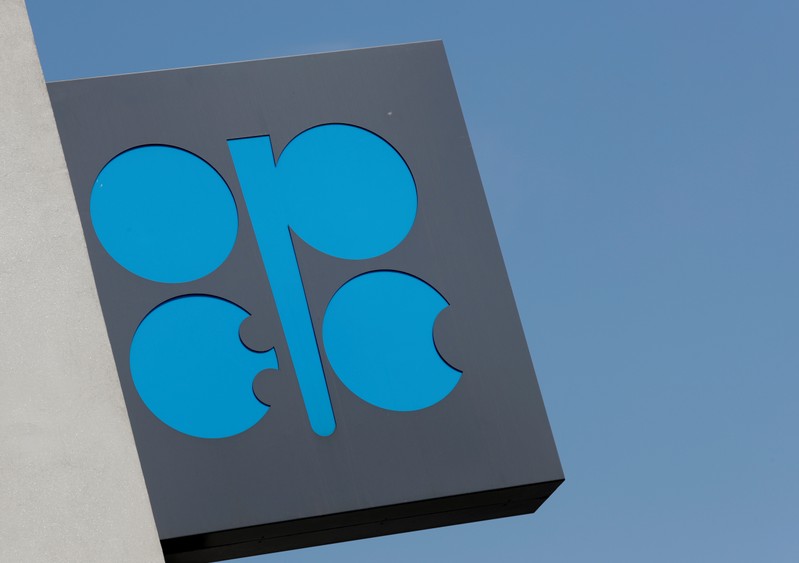 The logo of the Organisation of the Petroleum Exporting Countries (OPEC) is seen at OPEC's headquarters in Vienna, Austria July 1, 2019. REUTERS/Leonhard Foeger

LONDON (Reuters) - OPEC said on Thursday it expected demand for its oil to fall in 2020 as rivals pumped more despite a smaller surplus of crude in the global market, building a case for the group to maintain supply curbs when it meets to discuss policy next month.

In its last monthly report before the Dec. 5-6 talks, OPEC said demand for its crude would average 29.58 million barrels per day (bpd) next year, 1.12 million bpd less than in 2019.

That points to a 2020 surplus of about 70,000 bpd, which is less than indicated in previous reports.

The drop in demand could encourage the Organization of the Petroleum Exporting Countries and its allies to keep supply curbs in place when they gather in Vienna. But the report kept its 2020 economic and oil demand growth forecasts steady and was more upbeat about the outlook.

"On a positive note, signs of improving trade relations between the U.S. and China, a potential agreement on Brexit after the UK's general election, fiscal stimulus in Japan, and a stabilization of the downward slope in major emerging economies could stabilize growth at the current forecast level," OPEC said in the report.

The report echoes comments from OPEC Secretary General Mohammad Barkindo, who has said the outlook in 2020 could surprise to the upside, citing prospects for a resolution of the U.S.-Chinese trade row and lower non-OPEC supply.

A brighter outlook would lessen the case for the producers, known as OPEC+, to deepen their supply cuts. Barkindo said in October all options, including deeper cuts, were open although in recent comments he has downplayed reducing output further.

Oil prices were steady after the report's release, trading near $63 a barrel, below the level some OPEC officials say they favor.

OPEC, Russia and other producers have since Jan. 1 implemented a deal to cut output by 1.2 million bpd. In July, the alliance, known as OPEC+, renewed the pact until March 2020.

The report said oil inventories in developed economies fell in September, a trend that could ease OPEC concern about a glut. But stocks still exceeded the five-year average, a measure OPEC watches closely, by 28 million barrels.

OPEC and its partners have been limiting supply since 2017, helping revive prices by clearing a glut that built up in 2014-2016 when producers pumped at will.

But higher prices have also boosted U.S. shale and other rival supplies. OPEC expects its market share to fall in the next few years before recovering.

OPEC in the report trimmed its 2020 forecast for growth in non-OPEC supply to 2.17 million bpd, 40,000 bpd less than the previous forecast. World oil demand was expected to rise by 1.08 million bpd or 1%, unchanged from last month.

A slowdown in non-OPEC supply would help OPEC's effort to manage the market. But non-OPEC output is still expected to grow at almost twice the rate of world oil demand in 2020, presenting OPEC and its allies with a continuing challenge to balance the market.

OPEC's October output jumped by 943,000 bpd to 29.65 million bpd, according to figures the group collects from secondary sources, as Saudi Arabia's supply recovered from attacks in September.

The report suggested there would be a 2020 surplus of 70,000 bpd if OPEC kept pumping at October's rate and other factors remained equal, less than the 340,000 bpd surplus implied in September's report before the Saudi attacks.