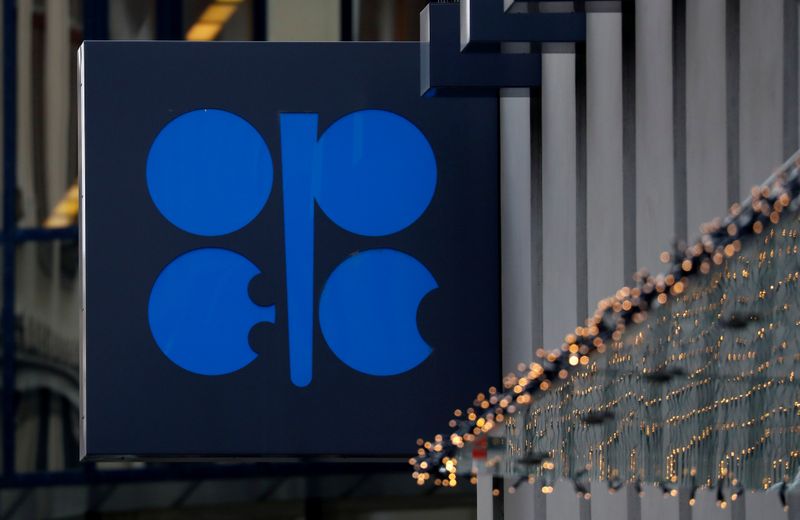 FILE PHOTO: The logo of the Organisation of the Petroleum Exporting Countries (OPEC) sits outside its headquarters ahead of the OPEC and NON-OPEC meeting, Austria December 6, 2019. REUTERS/Leonhard Foeger

LONDON (Reuters) - OPEC and other oil producers, a group known as OPEC+, are considering rolling over production cuts into April instead of raising output as a recovery in oil demand remains fragile due to the coronavirus crisis, three OPEC+ sources told Reuters.

The market has been expecting OPEC+ to ease production cuts by around 500,000 barrels per day (bpd) from April.

OPEC leader Saudi Arabia has also been expected to end its voluntary production cut of an additional 1 million bpd.

It was not immediately clear whether Saudi Arabia would end its voluntary cuts or extend them, they said.

Oil prices jumped by about $1 per barrel on the news to trade near $64 per barrel.

On Tuesday, a document by OPEC+ experts, seen by Reuters, called for "cautious optimism", citing "underlying uncertainties in the physical markets and macro sentiment, including risks from COVID-19 mutations that are still on the rise".

It said a recent oil price rally might have been caused more by financial players than improvements in market fundamentals.

Russia has been widely expected to push for more increases. But in February it failed to raise output despite being allowed to do so by OPEC+ as harsh winter weather hit output at mature fields.

JP Morgan, which said it had spoken to Russia's representative on the OPEC+ technical committee Denis Deryushkin, reported that Russia saw some rationale in raising output as the oil market was in a 500,000 bpd deficit.

"Russia believes that if output is maintained at current levels, the market would move into an even more severe deficit," the bank said. "As such, production needs to be restored, but the speed and amount are yet to be decided."