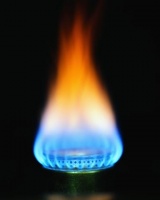 United States Natural Gas ETF (NYSE: UNG) declined in early trading on Monday, as futures prices fell below $3.75 per million btu. The decline is being tied to forecasts for warmer temperatures in December, which coupled with high overall storage levels is causing concern.

Today's decline may also be linked to profit taking following a recent rally that put gas prices at their highest level since the declined in the first-quarter of 2012.

The fall in prices is playing havoc for equities in the space, with Chesapeake Energy Corporation (NYSE: CHK) shares lower by 3.75 percent.