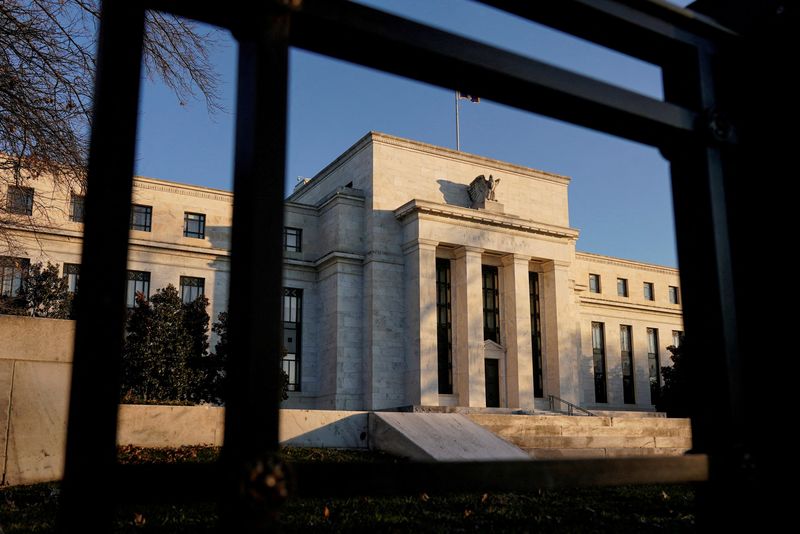 NEW YORK (Reuters) - The Federal Reserve could pause its monetary policy tightening in September if there is an economic deterioration and inflation subsides, BofA strategists said on Thursday, a day after the U.S. central bank released the minutes from its May policy meeting.

All of the Fed's policymakers agreed to hike interest rates by half a percentage point at the May 3-4 policy meeting to counter rampant inflation and most participants said further hikes of that magnitude in June and July could be appropriate.

But the minutes also showed the Fed grappling with how best to reduce inflation without causing a recession or pushing the unemployment rate substantially higher - a task that several participants said would prove challenging.

The central bank would likely pause its tightening in September, leaving its benchmark overnight interest rate in a range of 1.75% to 2% if financial conditions worsened, BofA strategists said in a note.

"We have recently seen a tenuous but remarkable change in Fed communications, where some Fed officials suggest the option of downshifting or pausing later in the year as they reach 2% given the challenging macro backdrop, tightening of financial conditions, and potentially softening inflation," they said.

Inflation, by the Fed's preferred measure, is currently running at more than three times the central bank's 2% target.

Fed funds futures traders on Thursday were pricing in 50-basis-point rate hikes at each of the central bank's June and July meetings and another 25-basis-point hike in September.

While noting that it was not its base case scenario, BofA said the central bank may see a federal funds rate at 1.75%-2% as providing "a normalization of policy which then offers an opportunity to pause and assess the impact on jobs and inflation."

A pause in tightening could lead to lower rates across the U.S. Treasury yield curve, the strategists said.

The benchmark 10-year U.S. government bond yield hit its lowest level since April on Thursday. It has fallen from 3.2% on May 9, as the bond market sees the economy slowing and expects inflation to lose momentum.

Other analysts, however, do not see the Fed as having shifted to a more dovish stance.

Strategists at TD Securities said they expected the central bank to hike rates above the neutral rate, the level which neither stimulates nor constricts economic growth, but at a more gradual pace after the June and July policy meetings. Fed policymakers estimate the neutral rate to be roughly between 2% and 3%.

"The views expressed in the minutes are about all they could say at the start of an aggressive tightening cycle where no one really knows how far rates have to go," investment bank Brown Brothers Harriman said in a note.

"The Fed is facing a very complicated situation and so is trying to burnish its hawkish credentials while trying not to pre-commit to any rate path", it said.