Analyst Sees Bitcoin Going from $54,000 to $4 Million Per Bitcoin 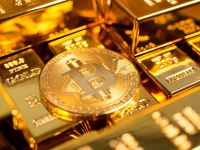 $4 million Bitcoin may sound like a fantasy, but one equity analyst thinks it's possible in the next 18-24 months. Global Equities Research's Trip Chowdhry in a note to clients said he thinks the digital coin will do just that, rise from $54,000 to $4 million.

Chowdhry thinks the SEC is "clearly supporting" Bitcoins on the balance sheet of public companies.

Another factor that could send Bitcoin higher is every Mutual Fund would need to own Bitcoins or they will become obsolete.

The analyst noted that many graphics cards that are also being used for mining Bitcoin are out of stock and silicon foundries such as TSMC are running at full capacity and cannot make chip deliveries for automakers.

Meanwhile, regulators may stand on the sidelines since Bitcoin owners and related entities are major donors to the administration.

"We are of the opinion that Bitcoin will get to $4 million per Bitcoin, in the next 18-24 months," wrote the analyst.