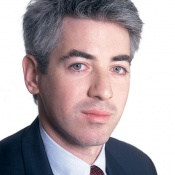 Ackman is a value investor with an activist bent. Activist investors agitate management for changes. He owns large positions in Target (NYSE: TGT) and Borders (NYSE: BGP). He has also been involved in activist situations at Wendy's (NYSE: WEN) and McDonald's (NYSE: MCD).

Ackman proved his acumen as a short seller in 2007/2008 as short positions he held in MBIA (NYSE: MBI) and Ambac (NYSE: ABK) proved to be big winners due to the credit crunch.

In July 2008, Ackman said he was short the common stock of Fannie Mae (NYSE: FNM) and Freddie Mac (NYSE: FRE). Ackman also laid out a plan to reorganize the GSEs, which would wipe out the common shareholders.