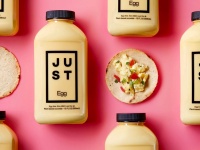 CHICAGO (Reuters) - As shoppers raise grocery spending due to the COVID-19 pandemic, plant-based egg startup JUST said it aims to turn an operating profit before the end of next year and then will consider an initial public offering.

Expectations for an IPO of the company, officially called Eat Just Inc, have been fueled by a boom in demand for plant-based food. Led by companies including Beyond Meat (NASDAQ: BYND) and Impossible Foods, U.S. retail sales of plant-based food rose 11% last year to $5 billion, with the faux egg market nearly tripling, according to market research firm SPINS.

San Francisco-based JUST makes a mung bean-based egg substitute that comes in bottles and looks like beaten fresh eggs. JUST, which makes a mayonnaise substitute as well, sells its products in stores including Walmart (NYSE: WMT), Kroger (NYSE: KR) and Whole Foods. With COVID-19 driving demand for groceries, sales have risen at plant-based food companies, including Beyond Meat which tripled retail sales in the April-June quarter.

JUST Chief Executive Josh Tetrick said that when the pandemic began spreading, he thought it would delay any plans for the company to go public. But customers, spending more time at home amid lockdowns, boosted purchases.

"It makes it more likely we'll go public sooner," he said. "The target to hit operating profitability is some time before the end of 2021."

"Once we hit operating profitability, then I'll really begin considering an IPO with my team and with my board and with some of our major shareholders," he said.

This is the first time the company has indicated when it could turn profitable and possibly list.

"It becomes difficult forecasting growth for these young plant-based companies because you're not going to see a company grow 40-50% a year for the next decade and the market is so competitive," said Kingsview Wealth Management's Paul Nolte, whose clients have invested in Beyond Meat.

"If one of these companies actually did manage to come in with an operating profit, we'd be interested in it."

To cut costs, Tetrick said the company needs to find ways to extract more protein from mung beans, and buy more beans from its suppliers in East Africa and Asia so it can negotiate lower costs. Eat Just said it also expects a sales boost from deals with consumer companies, retailers and chicken egg suppliers around the world.