What did you do during lockdown? I was playing 'Grand Theft Auto' 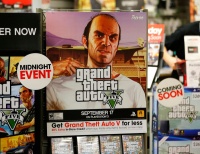 (Reuters) - Take-Two Interactive Software Inc (NASDAQ: TTWO) sold over 15 million units of "Grand Theft Auto V" in the first two quarters of the year, as more people lapped up the action-adventure videogame to keep themselves entertained during lockdowns.

The company has sold 135 million units of the hit franchise since its launch in 2013, with Bernstein analysts saying that sales were almost catching up with the installed base of relevant consoles, including Sony Corp's <6758.T> PlayStation and Microsoft Corp's (NASDAQ: MSFT) Xbox.

Take-Two shares, which are up more than 37% this year, hit a record high of $180.61, a day after it reported a blockbuster quarter.

"Grand Theft Auto V", the seventh installment of the franchise, follows the story of three protagonists - Trevor, Franklin and Michael - as they find their way through a fictitious California-like state to accomplish missions involving car-chases and shootouts.

Take-Two sold over 25 million units of "Grand Theft Auto V" globally in the last 12 months, more than double that of a year earlier.

"Our updated model puts 'GTA6' release in FY23," Bernstein analysts said, adding that their "GTA6" bull case has 110 million lifetime units and values the franchise at $19.4 billion, which is "more than the market cap of TTWO, on its own".

U.S. spending on video games in June surged 26% to $1.2 billion, the highest for the month in over a decade, according to research firm NPD, as people turned to games for relaxation during lockdowns and also purchased more in-game content.

At least 10 brokerages raised their price targets on the company's stock.

Graphic - How videogame stocks have done this year: https://graphics.reuters.com/TAKETWO-RESULT/yzdvxnkbdvx/chart.png

(Reporting by Ayanti Bera and Subrat Patnaik in Bengaluru; Editing by Anil D'Silva)