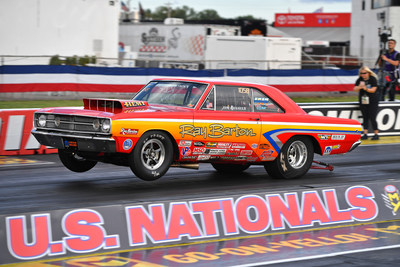 Three-time and defending NHRA Dodge HEMI® Challenge champion James Daniels leads a group of 20 drivers at the popular NHRA Sportsman event during the iconic U.S. Nationals at Lucas Oil Raceway at Indianapolis Aug. 28 – Sept. 2. The balance of the field of competitors piloting Mopar-powered 1968 Dodge Dart and Plymouth Barracuda Super Stock cars will look to end Daniels' juggernaut of the event, now in its 19th consecutive year of sponsorship by FCA US LLC.

Daniels' run of three straight NHRA Dodge HEMI Challenge victories in his Dodge Dart are the most consecutive wins by any driver, and the 23-year-old Pennsylvania native is looking to continue his quest to catch six-time event winner Charlie Westcott, Jr. Daniels and Westcott are also part of the only father-son combinations to win the event. Charlie Westcott, Sr. and Jim Daniels, James' father, won the HEMI Challenge race in 2009 and 2010, respectively.

"It's just incredible for Dodge and Mopar to put on such a cool event during the biggest drag race of the year," said Daniels, who will be one of seven competitors attempting to qualify for the field of 16, wheeling a 1968 Dodge Dart. "It means a lot to my father and myself. We came out to watch the race in 2003 before he started racing it in 2007. This will be my fourth year competing in it, and our goals haven't changed. We're really happy to be part of it and excited to be competing for another trophy."

Inaugural 2001 HEMI Challenge race champion Bucky Hess II in his Plymouth Barracuda and 2018 No. 1 qualifier Gary Wolkwitz piloting his Dodge Dart will join Daniels and the rest of field chasing the custom built 42.6-lb NHRA Dodge HEMI Challenge trophy, built to recognize the 426 HEMI engine. The entries represent 12 different states, as well as three drivers hailing from Canada. Racers will vie for cash awards to be received by all 16 competitors who participate in eliminations, with the triumphant driver taking the $15,000 winner's share.

The NHRA Dodge HEMI Challenge competitors will have a designated parking area in the Lucas Oil Raceway pit. A parade of HEMI Challenge cars will take place Friday morning, Aug. 30, prior to the start of eliminations, with the final round to crown the 2019 champion scheduled for Friday evening in prime time, just prior to NHRA Nitro qualifying.

The NHRA Dodge HEMI Challenge showcases Super Stock/A-HEMI (SS/AH) NHRA Sportsman class competitors battling on the quarter-mile in 1968 Mopar package cars, powered by the legendary 426 HEMI engine. The Dodge Dart and Plymouth Barracuda Super Stockers are among the earliest and most iconic iterations of the purpose-built vehicles created at the factory. The cars feature distinct race packages and are for use solely on the drag strip. The Dodge Dart and Plymouth Barracudas are precursors to the modern-day package car — the Mopar Dodge Challenger Drag Pak.

Reigning FSS champion Leah Pritchett, who will again pull double-duty in Top Fuel and Factory Stock, and fellow DSR teammate Mark Pawuk are seeking a repeat of their 2018 performance at Indy. The tandem earned the top qualifying positions and squared off in the final where Pritchett earned her first career FSS triumph. Pro Stock champion Allen Johnson qualified fourth at Indy last season and will look to have his best performance of the season, as well.

Dodge//SRT Mopar NHRA Nitro Drivers Look to Carry Momentum From Brainerd Triumphs; Teammates Seek Prime Playoff Positions In Countdown To The ChampionshipPritchett and Ron Capps lead the contingent of DSR Dodge//SRT Mopar-powered teams back to the U.S. Nationals with at least one thing in common: both are riding high after powering their way to the winner's circle on Aug. 18 in the Lucas Oil NHRA Nationals at Brainerd International Raceway in Minnesota.

Pritchett's triumph aboard her HEMI-powered Dodge//SRT Mopar Top Fuel Dragster was her first in 2019, while Capps defeated fellow DSR and Dodge Charger SRT Hellcat Funny Car driver Tommy Johnson, Jr. to pick up his third win of the 2019 campaign. Capps' victory was the sixth win in the previous 11 races by a Charger SRT Hellcat and at least one Hellcat has reached the final in 10 of those events. Pritchett and Capps are also seeking their first Indy triumph. Both had their best career U.S. Nationals results come in 2017 when Capps reached the final and Pritchett advanced to the semifinals.

The Indy event is also the 18th and final regular season race prior to the start of the six-race NHRA Countdown to the Championship. All five of the DSR Dodge//SRT Mopar teams in NHRA Funny Car and Top Fuel are locked into top-10 playoff berths, with only their final positions left to be determined. Johnson currently ranks second in Funny Car and leads three other DSR Dodge//SRT Mopar-powered teams inside the top-six.

Dodge Dragstrip Showdown Continues in IndyFans attending the U.S. Nationals will have the chance to go head-to-head behind the wheel of Dodge Challenger SRT Demon simulators and see if they can post the time to beat during the second year of the Dragstrip Showdown.

Hosted all weekend in the Dodge//SRT display on Manufacturers Midway, the Dragstrip Showdown allows participants to test their skills and compete for bragging rights, with top run times listed on www.dodgegarage.com. Winners will be announced after the NHRA Finals in Pomona in November, with top racers with the best ETs earning prizes, including Dodge Challenger SRT Demon remote control cars and gift cards for Dodge swag.

For complete information on the Dragstrip Showdown, including a list of events that will feature the Challenger SRT Demon simulators, as well as how those unable to compete in person can get in on the action and win prizes, visit www.dodgegarage.com.

For more than 100 years, the Dodge brand has carried on the spirit of brothers John and Horace Dodge, who founded the brand in 1914. Their influence continues today. For 2020, Dodge literally expands its high-performance Charger model lineup, adding a Widebody exterior to America's only four-door muscle car. Powered by the 707-horsepower supercharged 6.2-liter HEMI® Hellcat V-8 engine, the 2020 Dodge Charger SRT Hellcat maintains its reign as the most powerful and fastest mass-produced sedan in the world.

The 2019 Dodge Challenger SRT Hellcat Redeye is possessed by the Demon. Its 797-horsepower supercharged HEMI® high-output engine makes it the most powerful, quickest and fastest muscle car, reaching 0-60 miles per hour (mph) in 3.4 seconds, and the fastest GT production car with a ¼-mile elapsed time (ET) of 10.8 seconds at 131 mph. It also reaches a new top speed of 203 mph.

About MoparMopar (a simple contraction of the words MOtor and PARts) is the service, parts and customer-care brand for FCA vehicles around the globe. Born in 1937 as the name of a line of antifreeze products, the Mopar brand has evolved over more than 80 years to represent both complete care and authentic performance for owners and enthusiasts worldwide.

Mopar made its mark in the 1960s during the muscle-car era, with Mopar Performance Parts to enhance speed and handling for both road and racing use, and expanded to include technical service and customer support. Today, the Mopar brand's global reach distributes more than 500,000 parts and accessories in over 150 markets around the world. With more than 50 parts distribution centers and 25 customer contact centers globally, Mopar integrates service, parts and customer-care operations in order to enhance customer and dealer support worldwide.

Mopar is the source for genuine parts and accessories for all FCA US LLC vehicle brands. Mopar parts are engineered together with the same teams that create factory-authorized specifications for FCA vehicles, offering a direct connection that no other aftermarket parts company can provide. Complete information on the Mopar brand is available at www.mopar.com.