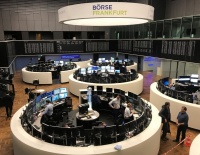 By Susan Mathew and Shreyashi Sanyal

(Reuters) - European shares rebounded from six-months lows on Friday, ending a tumultuous week on a positive note as hopes of fiscal stimulus from Germany lifted sentiment and sparked a rally in the battered banks sector, helping them post their best day in 4-1/2 months.

Germany's right-left coalition government would be prepared to ditch its balanced budget rule and take on new debt to counter a possible recession, Der Spiegel magazine reported on Friday.

Germany's DAX <.GDAXI>, pressured of late by fears of a slide into recession as trade tensions between the United States and China flare up, rose 1.3%, and German bonds came off lows after the report.

"The market is appearing to have some confidence that Germany will actually conduct some amount of fiscal stimulus while being on the brink of recession," said Yousef Abbasi, global market strategist at INTL FCStone Financial Inc in New York.

"This would be awfully encouraging. You could potentially see money rotate out of the U.S. and into Europe considering the divergence of performance and valuation we've had in the two developed markets."

Banks <.SX7P>, which have lost nearly 8% this month pressured by tumbling bond yields, were the top gainers on Friday up 2.4% to log their best session since early April.

With all other sectors also in the black, the pan-European stocks benchmark <.STOXX> rose 1.2%, adding to morning gains when stimulus hopes from Beijing had supported risk appetite.

The index, however, extended losses to a third straight week, down 0.5%, as worrying headlines of a global recession kept investors on edge, largely because of the trade drama.

While all major indexes in Europe rose more than 1%, Britain's blue-chip FTSE 100 <.FTSE> finished up 0.7%, lagging slightly after an outage at the London Stock Exchange due to a technical glitch cut trading short by almost two hours.