Passion for performance continues to grow as MotorTrend Group's "Roadkill Nights Powered by Dodge" was back in full force with an extra night of high-horsepower fun and a record amount of attendees. This year, more than 47,000 enthusiasts from around the country watched and participated in street-legal racing on historic Woodward Avenue. 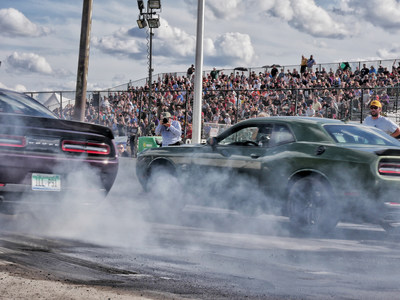 "When we first introduced 'Roadkill Nights Powered by Dodge' five years ago as a pop-up car show and drag race, we never imagined it would grow to nearly 50,000 performance enthusiasts over two days," said Tim Kuniskis, Global Head of Alfa Romeo and Head of Passenger Cars – Dodge, SRT, Chrysler and FIAT, FCA – North America. "The positive reaction from our fans and continued growth of this one-of-a-kind event fuels our passion to keep delivering products and marketing for performance enthusiasts."

In addition to cash prizes for the race winners and fastest Dodge cars on the drag strip, the fifth annual car festival gave attendees the chance to get in the passenger seat. They were able to take an exhilarating thrill or drift ride in the 707-horsepower Dodge Charger SRT Hellcat and the 717-horsepower Dodge Challenger SRT Hellcat, as well as thrill rides in the Durango SRT Pursuit "Speed Trap" concept. If that wasn't enough, they could also race for the best quarter-mile times in the Challenger SRT Demon simulators. More than 6,800 people experienced these Dodge//SRT vehicles firsthand over the span of the two-day event.

The car festival also included a chance to check out more than 300 custom and classic cars in a Show 'n' Shine and watch freestyle motocross dyno, flamethrowers and wheelstander exhibitions.

"Last year's Roadkill Nights was going to be hard to beat, but adding an extra event day this year really brought out a whole new level of turnout and excitement for car enthusiasts," said Michael Deer, MotorTrend Group Automotive Events Senior Director. "We appreciate the support from fans in the Pontiac community and around the country who joined us to experience all the drag racing and thrill rides that Roadkill Nights had to offer."

More than 120 street-legal cars hit the specially prepped 1/8-mile drag strip on Woodward Avenue between Rapid Street and South Boulevard to compete in high-powered drag racing for a cash purse totaling $30,000. The quickest Dodge cars in both the small and large tire categories also took home $5,000 each.

In addition to the street-legal drag racing, celebrities, local sheriffs and NHRA racers also hit the drag strip on Woodward Avenue this weekend.

On Friday and Saturday, the Mopar Career Automotive Program (CAP) public booth spread awareness of the program, which is designed to develop the most highly skilled service technicians in the auto industry. Mopar CAP hosted 20 students and 20 metro-Detroit area dealers to network for dealership placement after the completion of the program. Approximately 1,000 interested prospects received information regarding the Mopar CAP program during the "Roadkill Nights Powered by Dodge" event.

About MotorTrend GroupMotorTrend Group is the largest automotive media company in the world, bringing together Discovery's fast-growing MotorTrend TV, formerly Velocity, and a vast automotive digital, direct-to-consumer, social, and live event portfolio, including MOTORTREND, HOT ROD, ROADKILL, AUTOMOBILE, and more than 20 other industry-leading brands. With a monthly audience of 26 million across web, TV, and print, and 110 million social followers, culminating in 2 billion monthly content views across all platforms, the company encompasses television's #1 network for automotive superfans, a leading automotive YouTube Channel, and the MotorTrend app, the only auto-dedicated subscription video-on-demand service. MotorTrend serves to embrace, entertain, and empower the motoring world.