AUBURN HILLS, Mich., July 11, 2019 /PRNewswire/ -- The Dodge brand and The Struts (Interscope Records) are teaming up as part of a new summer advertising campaign launching across television, social and digital channels this week. The band's recently released rendition of "Dancing in the Street," which can be downloaded/streamed here, adds fuel to the Dodge brand's summer campaign, which includes pitting The Struts band members – Luke Spiller, Adam Slack, Jed Elliott and Gethin Davies – against each other on the race track in a 2019 Dodge Challenger R/T Scat Pack 1320. 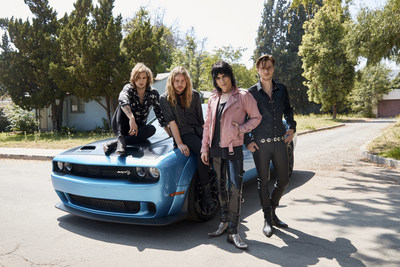 As part of the Dodge brand's social content, fans of The Struts will have the chance to see their favorite band member pitted against their bandmates on the drag strip. Luke, Adam, Jed and Gethin will learn about the 2019 Dodge Challenger R/T Scat Pack 1320 and its capabilities on the track. The guys will be coached on how to drive and race the Dodge Challenger, preparing each for a safe race down the track.

As The Struts are prepping to get behind the wheel, fans can hype up the race online through the Dodge brand's social channels, including Twitter and Instagram, with the chance to vote for who they think will win. Once ready, Luke, Adam, Jed and Gethin will each get the chance to race the 1/8 mile and the best time wins!

About The StrutsFormed in Derby, England in 2012, The Struts have found themselves massively embraced by some of the greatest icons in rock-and-roll history. Along with opening for Foo Fighters, The Rolling Stones, The Who and Guns N' Roses, the U.K.-bred four-piece band was also hand-picked by Mötley Crüe to serve as the supporting act for their last-ever performances. The Struts released their sophomore album YOUNG&DANGEROUS in the fall of 2018 and have been on the road nonstop since their formation, including worldwide headline shows and prestigious festival plays, including Lollapalooza, Governors Ball, Bottle Rock, Isle of Wright and many more. The Struts recently finished a sold-out European tour and are currently touring the states on their Young & Dangerous Tour 2019. Visit www.thestruts.com for more information.