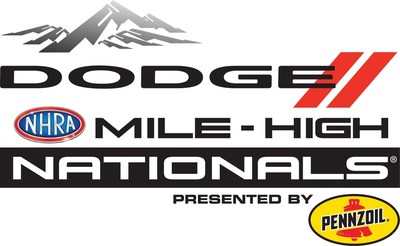 The Dodge Mile-High NHRA Nationals Presented by Pennzoil, the longest continuous running sponsorship in NHRA and one of the longest in all of motorsports, is rumbling back to Bandimere Speedway near Denver on July 19-21. The 2019 edition marks the 31st year of FCA US event sponsorship, a partnership that spans four decades.

"NHRA offers the perfect stage to connect with the performance and race enthusiasts who power our brand," said Tim Kuniskis, Head of Passenger Cars – Dodge, SRT, Chrysler and FIAT, FCA – North America. "Together with our friends at Mopar and Pennzoil, we continue to deepen our commitment to the sport because there's no better arena to showcase what Dodge//SRT represents on both the street and strip."

Later this year, Dodge//SRT will also return as title sponsor of the NHRA Dodge HEMI® Challenge at the historic NHRA U.S. Nationals. The brand will also take over title sponsorship duties at the Dodge NHRA Nationals Presented by Pennzoil, the penultimate event of the NHRA season, scheduled for October 31 - November 3, 2019, at The Strip at Las Vegas Motor Speedway.

At the track, fans will also have the chance to visit the Dodge//SRT and Mopar displays on Manufacturers Midway and to test their skills on Dodge Challenger SRT Demon race simulators. Education will also be the focus during the weekend, with more than 30 students from the Mopar Career Automotive Program (CAP) participating in the "Assemble Your Future" initiative.

The free-admission fan event will also feature Dodge//SRT Mopar drag cars on display. Renowned gearhead and TV/radio personality Willie B. will serve as the MC for the evening along with his co-host, automotive celebrity and podcast star Jeff Allen, and tunes will be provided all night courtesy of the Steve Thomas Band. Attendees can grab seat time in Demon race simulators and Pennzoil virtual simulators, purchase merchandise, including the commemorative Block Party T-shirt, and choose from a variety of food and drink stations. FCA US vehicles will be on display in the Larry H. Miller Chrysler Jeep® Dodge Ram area and fans can also sign-up for the chance to win $70,000 toward the purchase of any new FCA vehicle.

Enthusiasts can share their Block Party love on social media by using #MoparBP19 or #MoParty. For more information, visit www.Mopar.com and scroll to the blog section of the site.

Higher Education at 300 mph: Mopar CAP Students to Visit Bandimere SpeedwayFor the second time in 2019, the Mopar CAP program will host students at an NHRA event as part of the "Assemble Your Future" initiative. Through a partnership with Pennzoil, students from Arapahoe Community College, Lincoln Tech and WyoTech colleges will have the opportunity to visit with Hagan and Pritchett, tour the DSR pit areas and interact with Denver and Wyoming-area FCA US dealership representatives.

The Denver stop will be the second of four visits by the Mopar CAP "Assemble Your Future" initiative at NHRA national events in 2019, with the Mopar Express Lane NHRA Nationals Presented by Pennzoil near Reading, Pennsylvania, in September up next.

For more information on the Mopar CAP program, visit www.MoparCap.com.

Hagan debuted the Dodge Charger SRT Hellcat Funny Car body last year in Denver. Earlier this year, he became the first driver to claim victory in the new body with a win at the NHRA Arizona Nationals near Phoenix. The 2011 and 2014 Funny Car world champion, coming off a recent victory at the NHRA New England Nationals, is chasing his first triumph on "Thunder Mountain."

Pritchett returns looking to continue her Mile-High magic. Last July, she topped the field in qualifying before rocketing her Mopar Dodge 1320 "Angry Bee" Top Fuel dragster to her first Denver victory. Pritchett carried the 1320 colors on her dragster after helping to reveal the drag-oriented, street-legal 2019 Dodge Challenger R/T Scat Pack 1320 production vehicle, and she will again carry the "Angry Bee" logo this year.

Event Info: Dodge Mile-High NHRA Nationals Presented by PennzoilThe Dodge Mile-High NHRA Nationals Presented by Pennzoil is scheduled for July 19-21 at Bandimere Speedway, with qualifying Friday and Saturday, and elimination rounds on Sunday. Qualifying coverage will air live on FOX Sports 1 (FS1) from 7 p.m. to 8:30 p.m. ET and during a special one-hour qualifying recap show on Saturday, July 20 from 10 – 11 p.m. Three hours of eliminations coverage will air live on the national FOX Network starting at 3 p.m. ET on Sunday, July 21.

For more than 100 years, the Dodge brand has carried on the spirit of brothers John and Horace Dodge, who founded the brand in 1914. Their influence continues today. New for 2019, the Dodge Challenger SRT Hellcat Redeye is possessed by the Demon. Its 797-horsepower supercharged HEMI high-output engine makes it the most powerful, quickest and fastest muscle car, reaching 0-60 miles per hour (mph) in 3.4 seconds, and the fastest GT production car with a quarter-mile elapsed time (ET) of 10.8 seconds at 131 mph. It also reaches a new top speed of 203 mph.

About MoparMopar (a simple contraction of the words MOtor and PARts) is the service, parts and customer-care brand for FCA vehicles around the globe. Born in 1937 as the name of a line of antifreeze products, the Mopar brand has evolved over more than 80 years to represent both complete care and authentic performance for owners and enthusiasts worldwide.

Mopar made its mark in the 1960s during the muscle-car era, with Mopar Performance Parts to enhance speed and handling for both road and racing use, and expanded to include technical service and customer support. Today, the Mopar brand's global reach distributes more than 500,000 parts and accessories in over 150 markets around the world. With more than 50 parts distribution centers and 25 customer contact centers globally, Mopar integrates service, parts and customer-care operations in order to enhance customer and dealer support worldwide.

Mopar is the source for genuine parts and accessories for all FCA US LLC vehicle brands. Mopar parts are engineered together with the same teams that create factory-authorized specifications for FCA vehicles, offering a direct connection that no other aftermarket parts company can provide. Complete information on the Mopar brand is available at www.mopar.com.