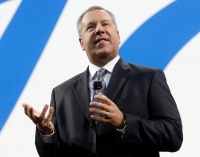 "They're certainly up year over year and they're up versus what we were expecting," Joe Hinrichs, Ford executive vice president and president of global operations, said of steel and aluminum costs.

U.S. steel costs are higher than anywhere else in the world, Hinrichs told reporters. Ford officials have been working with all the parties involved, including the U.S. government, to address the issues, he said at a plant in Wayne, Michigan, to celebrate next week's production launch of the Ranger midsize pickup truck.

While the United States reached a new regional trade agreement with Canada and Mexico late last month, the tariffs remain an issue. In addition, the United States and China are locked in a spiraling trade war in which they have lobbed increasingly severe rounds of tariffs on each other's imports.

The U.S. auto industry has warned against imposing more tariffs on Chinese products, saying that doing so would harm vehicle sales and cost jobs.

The only Ford exports that have been hurt have been vehicles built for the Chinese market, due to that country's move to increase tariffs to 40 percent after the United States slapped 25 percent tariffs on Chinese-built vehicles entering the United States, Hinrichs said. However, the affected vehicles are not a significant volume.

Ford Executive Chairman Bill Ford last month said the automaker wanted trade deals that allowed it to plan and invest with certainty. The day before, Chief Executive Jim Hackett said U.S. steel and aluminum tariffs would cost the automaker $1 billion in profit in 2018 and 2019.

The new Ranger pickup will go on sale in early January, bringing back a vehicle Ford previously killed in 2011.