ITEM 8.01 OTHER EVENTS
On November 11, 2015 Cell Source, Inc. announced initial indications that its Megadose Drug Combination has been used to successfully treat a cancer patient in Italy. Cell Source's proprietary Megadose Drug Combination (licensed exclusively from the Weizmann Institute of Science in Israel) is expected to increase bone marrow transplantation (BMT) success and survival.
Itamar Shimrat, CEO of Cell Source, stated: "We are pleased and proud that the first patient treated with the Megadose Drug Combination protocol has thus far shown a successful outcome, in fact mirroring the compelling results of our pre-clinical studies.  The treatment protocol the university is using is the same one we intend to use in our own future Phase I/II study. Therefore, the data resulting from their study will be an important indicator for Cell Source's future trials. This proprietary combination of an established cell therapy with U.S. Food and Drug Administration (FDA) approved drugs may have the potential to enable an improvement in the effectiveness and safety of use of mismatched BMT not only for blood cancers and other life threatening diseases, but, once BMT become safer, to treat non-malignant congenital diseases such as Sickle Cell Anemia."
Professor Yair Reisner, Chief Scientific Consultant of Cell Source, who developed the protocol at the Weizmann Institute of Science in Israel, stated: "While further results in more patients are required before we can make any definitive conclusion, the preliminary results with the first patient are encouraging, as they show successful engraftment of the transplantation, an absence of Graft vs. Host Disease, and the patient was able to successfully fend off several viral infections post-transplant, indicating that safe and successful mismatched bone marrow transplantation under reduced intensity conditioning using the Megadose Drug Combination is a real possibility."
A leading Italian university hospital with extensive BMT experience, an independent third party organization, has on its own initiative commenced a human clinical trial of Megadose Drug Combination on a self-directed basis. While Cell Source is not a sponsor of the trial, the results can serve as a proof of concept for the technology. The university, having filed and received approval of an investigational new drug application (IND) with the Italian Medicine Association, the Italian equivalent of the U.S. FDA, has commenced human clinical trials using the Megadose Drug Combination. The first patient was treated over four months ago and has shown remarkable preliminary results. This late stage cancer patient suffers from Multiple Myeloma, which is the second most common hematological malignancy in the U.S. (after non-Hodgkin lymphoma). The patient received a BMT from a mismatched donor under low levels of immune suppression. The procedure was successful and the patient was released from hospital. So far, the patient is in good condition and there appears to be full engraftment of the transplantation and no Graft vs. Host Disease.
Professor Franco Aversa, who conducted the transplantation, stated: "While I have conducted hundreds of mismatched bone marrow transplantations in the past, having now done so under reduced intensity conditioning, with excellent initial results, is very encouraging. If confirmed in subsequent patients this will represent an important milestone in making this potentially life-saving treatment available to a far broader set of patients than was previously possible."
In preclinical studies Megadose Drug Combination has shown success in inducing immune tolerance. The treatment was shown to enable the coexistence of host and donor DNA, thus significantly reducing transplant rejection. Cell Source is the exclusive worldwide licensee of a variety of progressive cell therapy technologies invented at the Weizmann Institute of Science, one of Israel's and the world's leading research institutes.
A copy of the associated press release is attached hereto as Exhibit 99 and is incorporated herein by reference.
ITEM 9.01 EXHIBITS
(d) Exhibits.
The exhibit listed in the following Exhibit Index is furnished as part of this Current Report on Form 8-K.


SIGNATURES
Pursuant to the requirements of Section 13 or 15(d) of the Securities Exchange Act of 1934, the registrant has duly caused this report to be signed on its behalf by the undersigned hereunto duly authorized.
3 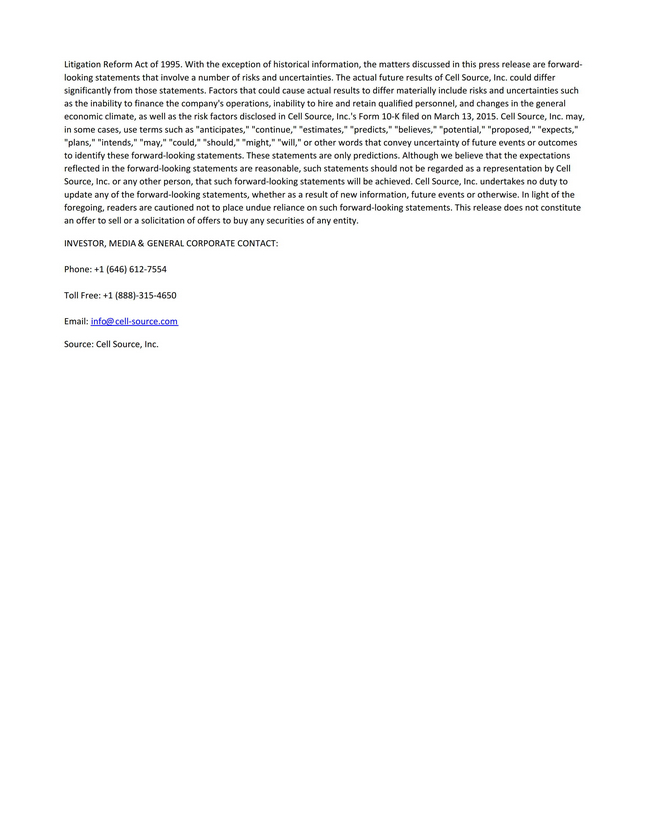