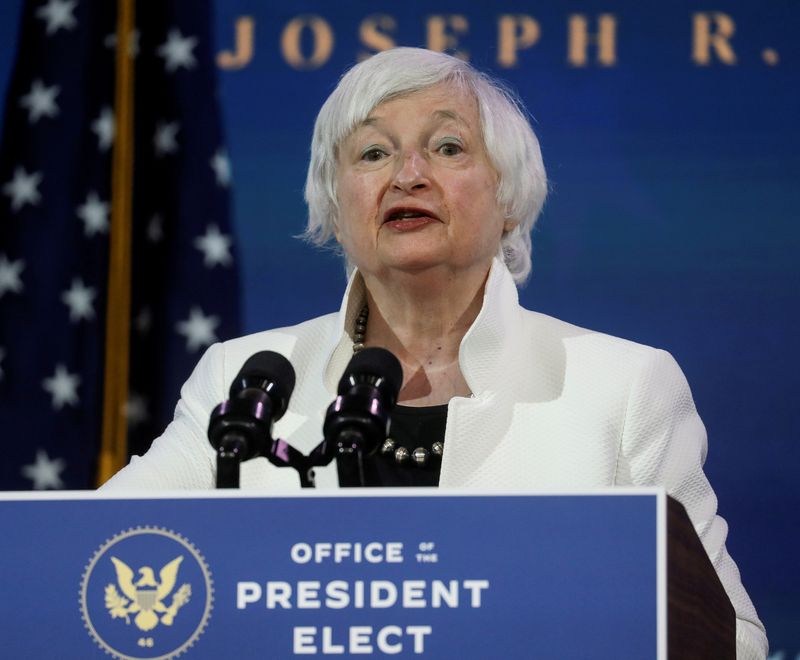 Yellen, on her first full day on the job after being sworn into office on Tuesday as the first female head of the U.S. Treasury, spoke with finance ministers Rishi Sunak of Britain and Olaf Scholz of Germany, Treasury readouts of the calls said.

Yellen stressed the importance of Washington's transatlantic partnerships, which frayed under former President Donald Trump, and agreed to work with both ministers "to end the pandemic, support a strong and sustained global economic recovery, fight income inequality and forcefully address the threat of climate change".

The Treasury also said Yellen noted the importance of collaborating closely on bilateral and global issues.

She discussed the need to find multilateral solutions to global economic problems including the challenge of "efficiently and equitably taxing the income of multinational firms". She pledged active U.S. participation in OECD discussions on international taxation to reach a timely agreement.

"It was a very friendly exchange, they agreed on good and close cooperation," a spokesman for Scholz said in Berlin, adding that the too hoped to meet soon in person when the COVID-19 pandemic allows.

A UK finance ministry statement said Yellen and Sunak agreed "that our number one priority continues to be supporting businesses, individuals and families through this crisis"

Britain, which holds the presidency of G7 industrial democracies this year, added that Sunak and Yellen agreed to work closely on a global solution to "tax challenges created by digitalization of the economy".

The Trump administration published results of "Section 301" investigations into digital taxes that found they discriminated against big U.S. tech firms, but stopped short of imposing tariffs, leaving that for the Biden administration.

The Biden administration has not indicated whether it will act on the reports but is seeking to engage with allies on a range of economic and trade issues.

(Additional reporting by David Milliken in London, Michael Nienaber in Berlin and Andrea Shalal in Washington; Editing by Mark Heinrich)