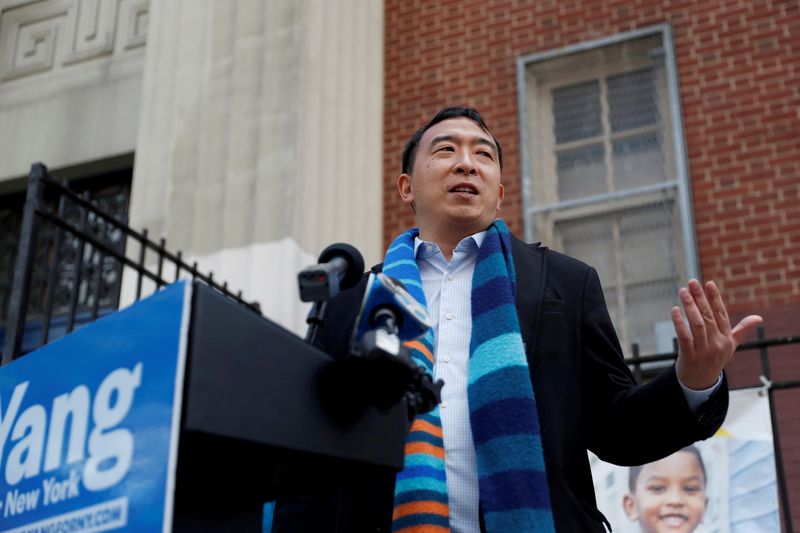 NEW YORK (Reuters) - Andrew Yang, the former presidential candidate and now New York City mayoral hopeful, bounded into a liquor store this week and listened as its owner shared how the business had suffered during the coronavirus pandemic.

John Lau told Yang many of his customers in the borough of Queens - mostly Chinese Americans - remained afraid to venture out thanks to the disease as well as a rise in violence and anti-Asian hate crimes.

Yang has vowed to tackle those problems during his upbeat campaign for mayor, promising to revive a weary city battered by the pandemic and facing deep economic, racial and public safety challenges. But more than half a dozen rivals have argued he lacks the experience to run the city of about 8.2 million, the most populous in the United States.

"I want people to look around our city and say that things are cleaner, things are safer, things are more vibrant, the opportunities are back - there's a sense of optimism back in New York City," Yang said at a campaign appearance on Monday.

New York is facing one of the most consequential elections in its history as it looks to recover from COVID-19. The city lost more than half a million jobs in 2020, disproportionately concentrated among people of color, and the country's largest public school system still has not fully reopened.

Wealth inequality, a lack of affordable housing and a struggling tourism industry also are among the problems awaiting its next leader.

Yang has led in most opinion polls since entering the race in January, a bona fide political celebrity on the strength of his surprisingly durable White House bid last year.

But with the June 22 Democratic primary that likely will determine the next mayor just six weeks away, as many as eight candidates remain viable in the race to succeed Mayor Bill de Blasio. The first of several televised debates is on Thursday, setting off a more intense phase of the contest as voters pay greater attention and campaigns pour millions of dollars into TV ads.

Several New York political veterans are jockeying for position, including Eric Adams, the Brooklyn borough president and former police officer; Scott Stringer, the city comptroller who has steadily risen through the political ranks; and Kathryn Garcia, the city's former sanitation chief who built a reputation as a problem solver at City Hall.

The primary election will be the first time the city uses ranked-choice voting, in which voters can list multiple candidates in order of preference. That format has added to the unsettled nature of the race.

Yang's rivals have sought to portray the tech entrepreneur - who has never voted in a city election and drew criticism for spending most of the pandemic at his upstate home - as all flash and no substance.

Similar to his presidential campaign, Yang has proposed a number of innovations, including a basic income of $2,000 a year to 500,000 poor residents.

His opponents have dismissed his ideas as implausible and questioned his ability to manage what has been described as the second-most difficult job in politics after the U.S. presidency. New York City's mayor oversees a $100 billion budget and more than 300,000 employees.

"He's not a New York fixture," said Christina Greer, a political science professor at New York's Fordham University. "He's the entertainment candidate. As we get closer to June 22 and the reality sets in about what leadership looks like, I'm not sure his lead will hold."

Opinion polls have shown Adams rising - he led Yang in one survey last week - as crime has become a main issue, especially after a shooting in Times Square last weekend in which three people were injured.

A former police officer who has spoken of getting beaten by police as a Black youth, Adams has put public safety at the center of his campaign, arguing it is a prerequisite for any economic recovery.

"To move forward, we cannot continue being derailed by the dangerous and violent behavior in our city," Adams told reporters on Monday in Manhattan.

"People aren't going to come back to work on mass transit if they're going to get mugged," said Kathryn Wylde, who heads the Partnership for New York City, a prominent business organization.

Stringer, the leading liberal candidate, has seen his campaign falter after a former volunteer accused him of groping her two decades ago. He has denied the allegations, but some progressive groups have turned to Wiley and Morales as alternatives.

Garcia, who has trailed in fundraising and polling, scored the coveted endorsement of the New York Times editorial board this week, which could boost her campaign to become New York's first female mayor.

With the city in a "transformational moment," as she put it at a campaign event on Tuesday, Garcia has argued that her career as a public servant makes her the best choice. She has overseen 10,000 sanitation workers, fought lead poisoning in public housing and served as the city's "food czar" during the pandemic for struggling families.

"I have the experience to actually get it done," she told the radio station WNYC on Wednesday. "That's the absolute differential."