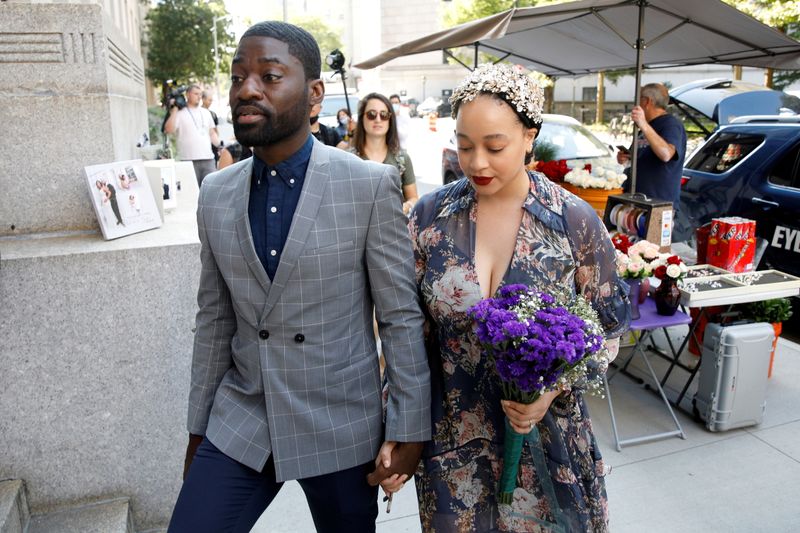 Richard Kissi and Sam Feurtado arrive for their wedding ceremony on the day the Manhattan Marriage Bureau reopened after being shut down due to the coronavirus disease (COVID-19) pandemic, in New York City, U.S., July 23, 2021. REUTERS/Brendan McDermid

NEW YORK (Reuters) - Sae Feurtado and Richard Kissi's long wait to say "I do" finally ended on Friday, when in-person weddings resumed at the Manhattan Marriage Bureau after a 16-month shutdown.

Before COVID-19, thousands of people from all over the world every year exchanged marriage vows in the two chapels housed inside the late 1920s Art Deco building in lower Manhattan.

After postponing their wedding for nearly two years, it was the New York couple's turn.

"It was meant to happen today," said a nervous and excited Feurtado, 32, clad in a flowery gown and a dazzling headpiece, clutching a bouquet of purple flowers.

"It was worth the wait," said Kissi, 34, sporting a blue and gray suit, said as the couple emerged from the building.

Under new reopening rules, wedding ceremonies are by reservation only, City Clerk Michael McSweeney said, and couples are allowed to bring only one witness to respect the four-person limit in the pastel-colored East and West chapel.

Typically the civil ceremonies, which had been conducted at nearby City Hall until 2009, last about 10 minutes.

Couples are required to wear a mask. A plexiglass sheet has been mounted on the podiums from which officiants perform ceremonies.

A small shop in the marble hallway leading to the chapels offers flowers, rings, veils and bowties for anyone who might have forgotten a wedding essential.

"We are delighted," McSweeney said of the reopening, which was announced last week by New York City Mayor Bill de Blasio.

Pablo Calderon and Fabian Gavilanes said they were able to lower their masks to seal their vows with a kiss on Friday morning.

Calderon, 31, wore a suit and tie to mark the big day while Gavilanes sported a light pink bowtie over a white shirt.

They said they were thrilled to finally get married after COVID-19 forced them to postpone their wedding, which was originally scheduled for last August.

A long line of celebrity couples have tied the knot at New York City's Marriage Bureau, including baseball legend George Herman "Babe" Ruth, whose signature appears in a ledger book in one of the chapels.

While the bureau has been issuing marriage licenses throughout the pandemic, virtual weddings only got off the ground in May due to security issues and technical hurdles, McSweeney said. Some 300 were performed between May and July.

Outside the building, George Taxi set up his flower stand on Friday for the first time since March last year. Bouquets of roses adorned with baby's breath and purple statice were showcased in vases next to trays of rings.

"It feels great to be back," said Taxi. "Just being around people who are happy. ... It's one of the happiest days of their life so to be a small part of that is great."