Why I volunteered for a COVID-19 vaccine trial 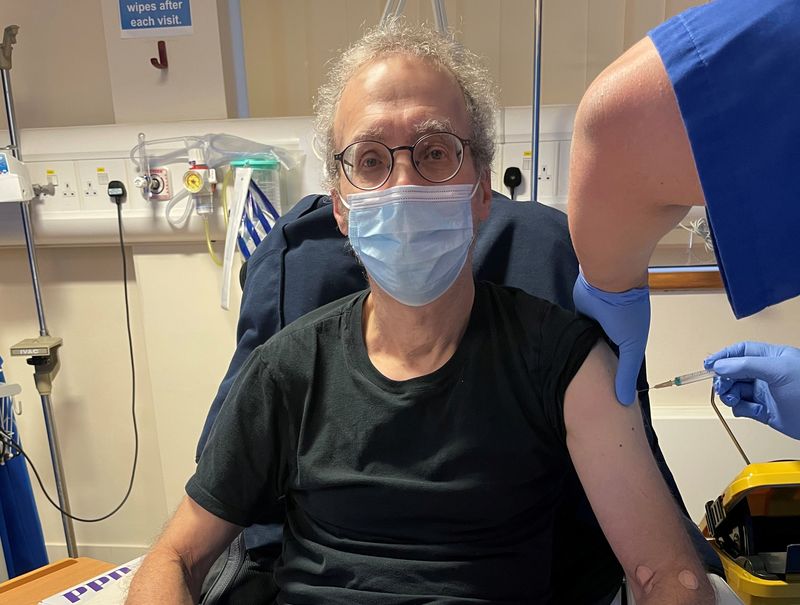 LONDON (Reuters) - So why did I volunteer to be injected with an experimental vaccine for COVID-19? That's what some of my friends wanted to know when I told them what I was doing.

"Who knows about the long term," texted a former college roommate. "Seems like a gamble."

It all began in July when the British government announced it was seeking lots of volunteers for large-scale clinical trials of new vaccines. Only a month before, a good friend of mine here had died of COVID-19 after spending weeks on a ventilator.

Curious, I completed an online form, figuring I wasn't committing myself to anything.

In late September, an email informed me that I was among more than 250,000 "pioneers in the fight against COVID-19" who had enlisted in the cause. On Oct. 1, I was invited to apply for a trial of a vaccine made by an American biotech company called Novavax Inc (NASDAQ: NVAX). It was seeking at the time up to 10,000 volunteers in the United Kingdom for a late-stage trial to determine the vaccine's safety and effectiveness.

"If you are aged 18-84 and in good health, you could be eligible to participate," the email stated. "The study involves six visits over a period of around 13 months. Reasonable travel expenses will be reimbursed."

Now, it was time to decide. I began researching the Novavax vaccine, which has received less attention than several others. On Monday, Pfizer Inc (NYSE: PFE) announced its COVID-19 vaccine candidate appeared to be more than 90% effective. In September, late-stage trials of a vaccine developed by the University of Oxford and AstraZeneca Plc (NASDAQ: AZN) were halted after a report of a serious neurological illness in a volunteer, although the trials later were permitted to resume.

To me, the Novavax vaccine seemed less risky. Although the Maryland-based company has never received approval for a vaccine, it's employing the same technology to create its COVID-19 candidate that it used with a promising flu shot. I've gotten inoculated against the flu every year for decades and never once had an adverse reaction.

The published results of the first phase of testing the Novavax vaccine also showed no serious side effects among more than 100 participants who were injected with it. The worst case was someone who had a mild fever for a day.

I decided to go for it. I figured if life is ever going to return to normal, the world is going to need vaccines and volunteers to see if they work. On a selfish level, I liked the idea of getting inoculated as soon as possible, given how monotonous â and sometimes scary â my daily routine had become. I've become so risk-averse that my wife has called me her "jailer."

Another attraction: If I were to catch the virus, the researchers would carefully monitor me. In the UK, where there has been a surge in new COVID-19 cases to more than 20,000 a day, infected people essentially are on their own unless they require emergency care.

Of course, there was a 50-50 chance I would be injected with a placebo â a saline solution â that wouldn't protect me against anything. In testing vaccines, placebos are used as a control to see whether the real thing is more effective at fending off the virus.

And so, after an online and over-the-phone screening to determine if I had any medical conditions that disqualified me from the study, I was given an appointment for the first of two injections.

I showed up one recent morning at the clinical research facility at King's College Hospital in south London â a small, drab building that is part of a sprawling medical complex. To my surprise, the receptionist asked me to take off my "Churchill Pro" bike mask â which costs $33 and uses "British Military Filtration Technology" to block "almost 100%" of viruses â and replace it with a cheap, disposable one. I later learned this was because my super-duper mask potentially could be contaminated.

Several other volunteers were already in a large room getting set up. I met privately with a doctor who asked if I had any questions. I had a few: "What if the Novavax vaccine proved so successful that the trial was stopped? Would I be told whether I received the placebo and, if so, be given the real vaccine?" The doctor told me that if I had gotten the placebo, I would have to wait a year, since the researchers would want to keep monitoring every trial participant. Not what I wanted to hear.

"What if another vaccine is approved first and I was given the placebo? Would I be allowed to take that?" The doctor suggested that was possible.

After I signed a consent form to participate in the trial, she gave me a brief physical exam. Back in the large room, a nurse gave me a COVID-19 test, sticking a long swab up my throat and then through a nostril. Then he prepared to draw my blood. I warned him my veins were thin and often proved problematic. He proceeded to fail twice before calling over a colleague who had better luck.

The injection itself was uneventful. But when the nurse checked my blood pressure afterward, it had spiked. He asked me to wait a few minutes and basically calm down. I thought about the meditation exercises I had always scoffed at but had recently tried to reduce pandemic-induced anxiety â breathe in, breathe out. It worked.

So far, I've experienced no side effects and am awaiting a second injection once three weeks have passed. Curious about my experience, I spoke to James Galloway, a senior clinical lecturer at King's College who is the doctor responsible for my trial.

He told me that no decisions have been made on what to do with volunteers who received the placebo if Novavax is shown to be effective or another vaccine is approved first. He later added, "If we get another vaccine that works, we'd want people to get that vaccine if they've had the placebo."

"We don't want anyone to suffer from participating in the study," he said.

A spokeswoman for Novavax later told me volunteers would discuss their options with the clinicians overseeing the trial sites.

Galloway said there's a theoretical risk if someone who got the Novavax vaccine is injected with a different one. "There's a chance you'd have a reaction."

He doesn't know how the UK Novavax trial is going so far because he doesn't have access to the data. But overall, he remains optimistic that effective vaccines against COVID-19 will arrive.

As it happens, the 42-year-old doctor contracted COVID-19 himself last spring. He said he had a fever for 10 days and was briefly hospitalized after developing a heart rhythm problem. "I wouldn't wish it on anyone," he said.