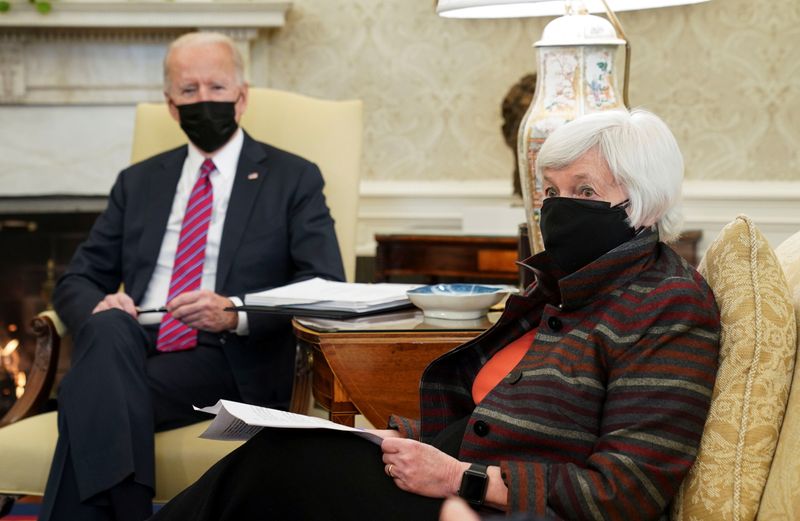 By Steve Holland and Andrea Shalal

Asked if President Joe Biden viewed the deal as still in effect, she told a White House briefing: "Everything that the past administration has put in place is under review, as it relates to our national security approach, so I would not assume things are moving forward."

Psaki said the Biden administration was focused on approaching the U.S.-China relationship "from a position of strength, and that means coordinating and communicating with our allies and partners about how we're going to work with China."

Trump signed the Phase 1 trade agreement with Chinese President Xi Jinping in January 2020, easing a nearly 18-month trade war in which U.S. and Chinese goods worth hundreds of billions of dollars were hit by tit-for-tat tariffs, slowing trade between the world's two largest economies.

Under the deal, Beijing promised to boost purchases of U.S. agricultural and manufactured goods, energy and services by $200 billion above 2017 levels over two years. But its purchases fell far short in 2020.

Chad Bown, a fellow at the Peterson Institute for International Economics, this month released an analysis showing that China's purchases of U.S. goods in 2020 fell 42% short of the commitment Beijing made in the trade agreement.

No comment was immediately available from the White House on whether the Biden administration was actively considering withdrawing from the interim trade deal.

Treasury Secretary Janet Yellen also flagged a comprehensive review of China's implementation of the trade deal in written responses to questions from lawmakers last week, and said Washington would work with allies to address "abusive" practices by the world's second-largest economy.

Doug Barry, spokesman for the US-China Business Council, said it made sense for the Biden team to review the trade deal and other Trump policies, but downplayed concerns about any imminent cancellation.

"We donât read too much into the process at this point. China has 11 more months to fulfill its promises to purchase an additional $200 billion in U.S. products," he told Reuters.

Barry noted that China had already made significant purchases of agricultural products, boosting jobs in that sector, and said Chinese officials had signaled that they planned to meet their commitments under the trade agreement.

"Doing so is key to eventually rolling back mutually harmful tariffs on each otherâs goods which have cost American jobs, reduced GDP, and increased living costs. Scrapping the deal could make those tariffs and the damage they are causing permanent," he added.