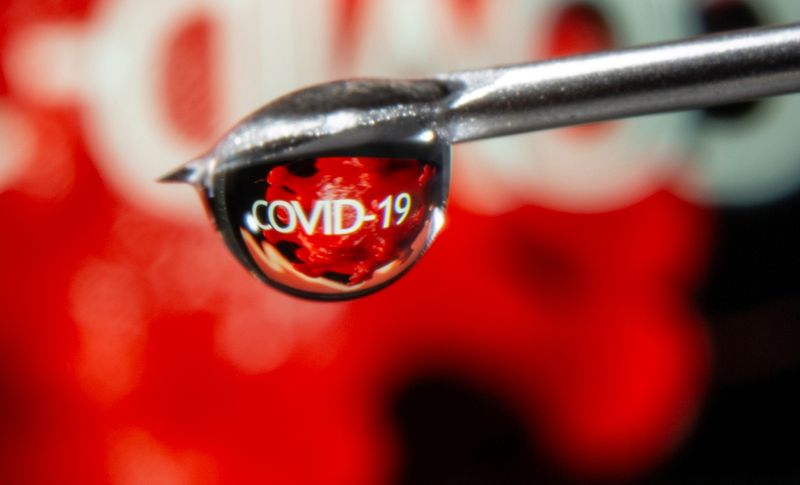 FILE PHOTO: The word "COVID-19" is reflected in a drop on a syringe needle in this illustration taken November 9, 2020. REUTERS/Dado Ruvic/Illustration

(Reuters) - The number of available COVID-19 vaccine doses is steadily rising, but a shortage of physical space that meets standards for pharmaceutical manufacturing is a major bottleneck to further expansion, according to drugmakers, industry construction experts and officials involved in the U.S. vaccine program.

The production of raw materials, vaccine formulation and vial filling all require "clean rooms" with features like air cleaners, sterile water and sterilizing steam designed and in some cases built by specialists.

Moderna Inc on Wednesday announced plans to expand vaccine manufacturing capacity, but said it will be a year before that can add to its production.

With vaccines needed for billions of people to end a pandemic that has claimed more than 2.5 million lives globally, drugmakers have even had to turn to rivals for help to churn out doses. Space at third-party contract manufacturers in the United States is largely allocated, according to one major contract manufacturer and other smaller companies.

A recent U.S. Government Accountability Office report flagged a shortage of manufacturing capacity as a challenge in scaling up vaccine production.

And the emergence of new coronavirus variants is likely to increase the strain on production capacity.

Public health experts say global vaccination as soon as possible is critical to curbing the rise of highly contagious additional variants. Many are counting on authorization of Johnson & Johnson's vaccine this week.

"What's happening now indicates the importance of markedly strengthening the capacity of manufacturing capabilities in the United States," said Larry Corey, a virologist at the Fred Hutchinson Cancer Research Center who helped design U.S.-backed vaccine trials. "We should be investing, large scale, in our abilities to manufacture."

"To change that substantially in terms of drug substance would take ramping up global manufacturing infrastructure. That takes months," he said. "You would have to build, train, validate, and get regulators to visit and approve a site."

Leading vaccine developers Pfizer and partner BioNTech, Moderna, AstraZeneca, J&J, Novavax, Russiaâs Gamaleya Research Institute, and CureVac are aiming to make enough vaccine with manufacturing partners to inoculate some 5.2 billion people in 2021, according to a Reuters tally of public statements and media reports.

China's Sinovac and Sinopharm will likely deliver significant supplies as well, though their 2021 targets are unclear. Several drugmakers have struggled to meet early production targets.

Building new facilities and even expanding existing manufacturing sites has typically taken years. During the pandemic, some projects have been completed in as little as 6-to-10 months, according to some specialized construction companies involved with Warp Speed.

Emergent BioSolutions , which is making J&J and AstraZeneca vaccines for the United States, cannot add any more equipment to facilities dedicated to those vaccines.

The company is not alone. "The contract manufacturing network, like our facility, is pretty full," said Emergent Executive Vice President Sean Kirk.

"Building the clean room is probably what we call the critical path," he said. "That's the part that takes the longest."

Vaccine makers have sidestepped this in part by retrofitting existing facilities. BioNTech bought a facility in Marburg, Germany, from Novartis in September, and began producing messenger RNA - the active ingredient in its vaccine - in early February.

When Emergent joined Warp Speed last year, it stopped everything else it was working on at its Baltimore facility to make room for the COVID-19 vaccines.

The U.S. government can use the Defense Production Act to force that kind of reshuffling. Supply orders with a federal "rating" under the law must be filled first. But there are limits to what it can do without threatening supplies of other injectable medicines.

Pfizer last week said it had engaged two U.S. contract manufacturers and would add capacity to formulate vaccines and make raw materials at its own sites, but did not specify whether new clean rooms would be installed.

In adding clean room space to existing sites, drugmakers and their suppliers have leaned heavily on pre-fabricated wall panels and pods that speed the process, according to specialist companies that build those spaces.

"It was sort of the only way," Peter Walters, director of advanced therapies at CRB, which designs and manages construction of the facilities, said of the pre-fabricated systems.

CRB has worked on more than 20 coronavirus vaccine-related projects. The program has "certainly redefined, to a lot of the industry, what could be possible," Walters said.