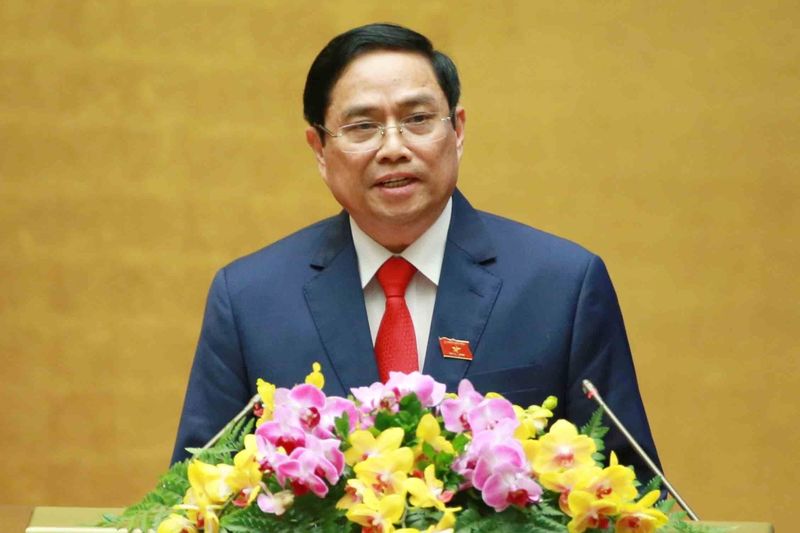 The move completes the five-yearly renewal of Vietnam's top four positions, as it looks to maintain economic growth, keep the coronavirus pandemic at bay, and balance relations with Beijing and Washington.

China has been asserting its authority in the South China Sea, while the U.S. Treasury Department labelled Vietnam a "currency manipulator" in December due to its trade surplus with the United States and heavy foreign exchange market intervention to hold down the value of its dong currency.

Chinh, 62, was the sole nominee put forward by the ruling Communist Party for the post at a congress earlier this year. He won 96.25% of the vote at Monday's National Assembly vote.

He was formerly head of the party's Central Organisation Commission, which has a long reach across party ranks, as well as deputy minister of the Ministry of Public Security, the agency tasked with everyday policing, the monitoring of dissent and surveillance of activists, as well as espionage overseas.

Vietnam has no paramount ruler and is officially led by four "pillars": the powerful General Secretary of the Communist Party, the president, the prime minister and the chair of the National Assembly, a largely rubber-stamp legislature.

A new head of the Assembly was appointed on April 1, while Nguyen Phu Trong was elected to a third term as General Secretary of the Communist Party earlier this year.

The main candidates for each post were widely known in Hanoi's political circles, but were officially declared top secret in December to discourage potentially critical debate.

Chinh will be the first Vietnamese prime minister not to have previously served as a deputy prime minister since the launch of the country's progressive "Doi Moi" reforms.

Vietnam's annual gross domestic product (GDP) growth has averaged 6.0% over the past five years, and expanded 2.9% in 2020, despite a pandemic that crushed economies elsewhere.

The country has been lauded globally for containing the virus thanks to a centralised quarantine programme and mass testing. It has reported around 2,600 infections, and 35 deaths.

From 1989-1996, Chinh was posted to the Vietnamese embassy in Romania. He spent the next few decades at the security ministry, where he rose to rank of Lieutenant General.

From 2011-2015, he was party chief in Quang Ninh, which borders China, where he pushed for the opening of one of three planned Special Economic Zones which were eventually scrapped following nationwide anti-China protests in 2018.