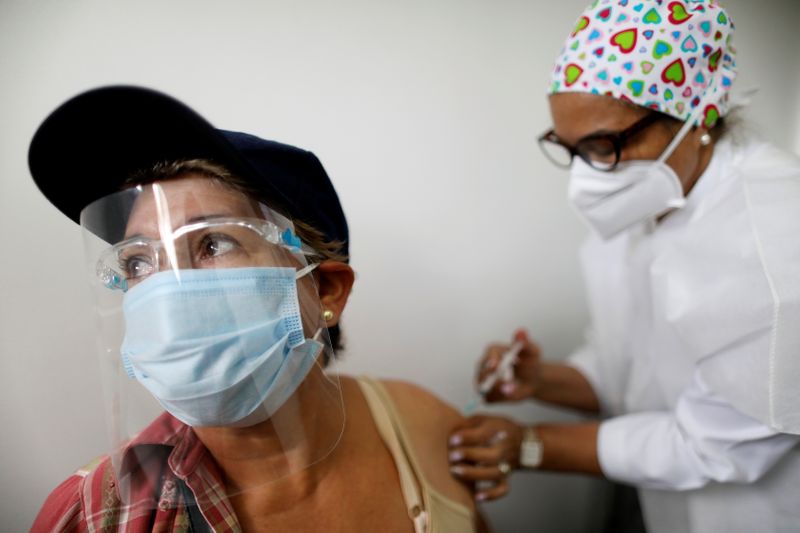 (Reuters) - Venezuela has paid $64 million, half of the required amount, for doses it is set to receive through the global COVAX program, Vice President Delcy Rodriguez announced Saturday on state television.

"You know that the COVAX mechanism requires an advance - Venezuela has even doubled the required advance," said Rodriguez, adding that the government had deposited "59.2 million Swiss francs in the accounts of GAVI," a co-leader of the COVAX program that seeks to improve low-income countries' access to vaccines.

Rodriguez did not specify what funds the government used to pay for the vaccines.

In recent months the government has held talks with opposition leaders to obtain vaccines via the COVAX program using funds frozen in the United States.

Those efforts had been complicated by President Nicolas Maduro's refusal to accept the AstraZeneca vaccine following reports of blood clotting elsewhere. COVAX this year said it had set aside doses of the AstraZeneca shot for use in Venezuela.

In her announcement, Rodriguez said Venezuelan health authorities were evaluating which vaccines the country would accept, especially considering various variants of the coronavirus, particularly the variant that originated in Brazil.

The vice president highlighted that in September 2020 the government entered into the agreement for over 11 million doses, which would vaccinate around 20% of the population.

Rodriguez added that the remaining $60 million worth were "guaranteed."

COVAX expects to deliver at least 2 billion doses this year and to diversify the offering beyond the AstraZeneca/Oxford and Pfizer/BioNTech shots it is currently supplying.

Venezuela's vaccination campaign is behind most other countries in the region.

It has received about 500,000 doses of the Sinopharm vaccine from China and about 250,000 of Russiaâs Sputnik V, of which authorities recently said they expect the arrival of another 30,000 shortly.

As of Friday, Venezuelan authorities had registered 172,461 coronavirus cases and 1,739 deaths. Medical unions say the number of cases and deaths are likely much higher.