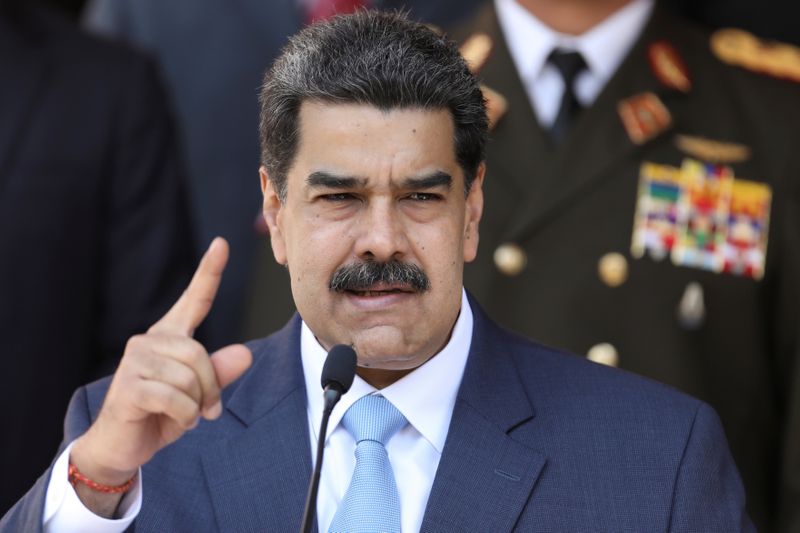 By Corina Pons and Mayela Armas

CARACAS (Reuters) - A price war between world oil producers has slashed Venezuela's revenue for its top export and exacerbated the country's financial crisis as it also faces the coronavirus pandemic, U.S. sanctions and sliding crude output.

More than 90% of Venezuela's export revenue comes from oil. The country risks generating less than $8 billion this year, a third of $25 billion in 2019, according to Caracas-based economic consultancy Ecoanalitica. Two other local consultants also projected the government will have less than half the funds it managed last year.

Three weeks ago President Nicolas Maduro called crashing oil market a "brutal blow" that dropped the price below the cost of production.

Last week Venezuela's production fell below 700,000 barrels a day. The oil sector has dealt with years of underinvestment and understaffing, and U.S. sanctions have limited the state oil company's access to international financing and prevented it from marketing crude in the United States.

Russian oil company Rosneft, which had been trading most of Venezuela's oil in the Asian market, last week announced its business in the country would be taken over by another Russian company.

These changes and a drop in global oil demand due to the pandemic have bulged Venezuela's oil inventories at a time when it most needs to sell barrels.

Neither the Information Ministry, Central Bank or state oil company PDVSA responded to Reuters' inquiries about their estimated income this year.

Last year Maduro reduced controls on the economy that allowed companies and individuals to bring in dollars and operate with greater freedom. Now under quarantine, these entities will have fewer resources.

Government funds from operations other than oil, such as gold sales, does not exceed $2 billion, according to the local firm. The foreign exchange deficit will be around $7.6 billion, Ecoanalitica calculates.

In 2019, the government imported about $550 million in food, according to port records, with 40% of shipments coming from China.

"The government has to renegotiate the debt with China and Russia," said AsdrÃºbal Oliveros, economist and director of the local firm, who pointed out that Maduro will also have to reduce imports of basic goods such as food and gasoline.

Unlike other governments in the region, Maduro has avoided exempting companies and businesses closed during the quarantine from taxes. He has rationed gasoline, hindering food distribution.

"There is concern about maintaining tax revenues, but under these conditions, maintaining them simply deepens the recession," said economist Tamara Herrera, director of the firm Sintesis Financiera.