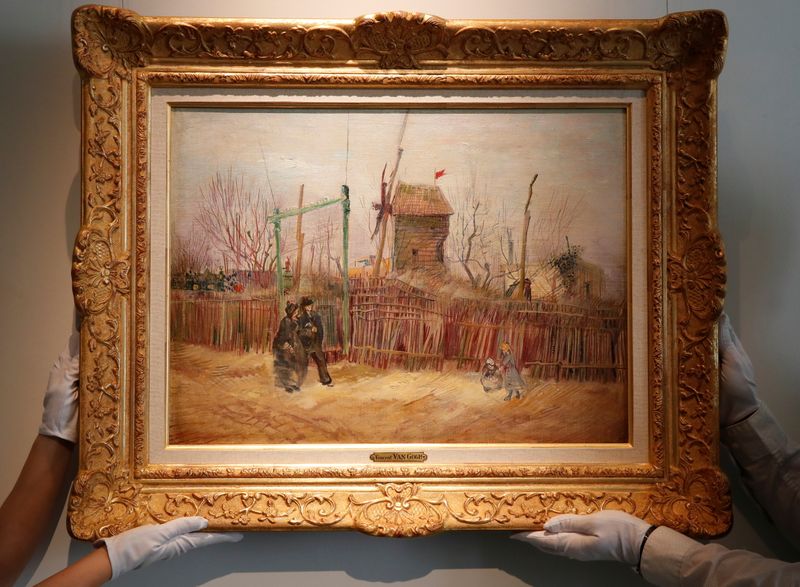 FILE PHOTO: Sotheby's Paris employees pose with the 1887 painting of a Paris street scene "Scene de rue a Montmartre" by Dutch painter Vincent Van Gogh which will be presented to the public for the first time after spending more than a century behind clos

PARIS (Reuters) - A Vincent Van Gogh painting of a Paris street scene fetched 14 million euros ($16.47 million) at auction on Thursday, only to be put back under the hammer and sell for a lower amount.

Auction house Sotheby's said there had been a glitch with its online bidding system during the first sale of the painting, which had been held in a private collection for more than a century.

The painting "Street scene in Montmartre" received a highest bid of 11.25 million euros the second time around. With costs, it sold for 13.1 million euros.

That exceeded the 5-8 million euros the auction house had estimated for the work, painted in 1887 while the artist was lodging with his brother Theo in the French capital.

The auction took place in Paris with bidding online or by phone from Paris, New York and Hong Kong.

The painting, which depicts a man and woman strolling arm in arm past a ramshackle fence with a windmill in the background, came from the collection of a French family.

It is part of a series Van Gogh produced of scenes in Montmartre, a hilly district of Paris now dominated by the Sacre Coeur church.

Van Gogh arrived in Paris in 1886 and left the city in 1888, saying he had tired of its hectic pace of life.

He moved to the south of France, where he cut off part of his ear during an episode of mental illness. The artist later shot himself and died near Paris on July 29, 1890.