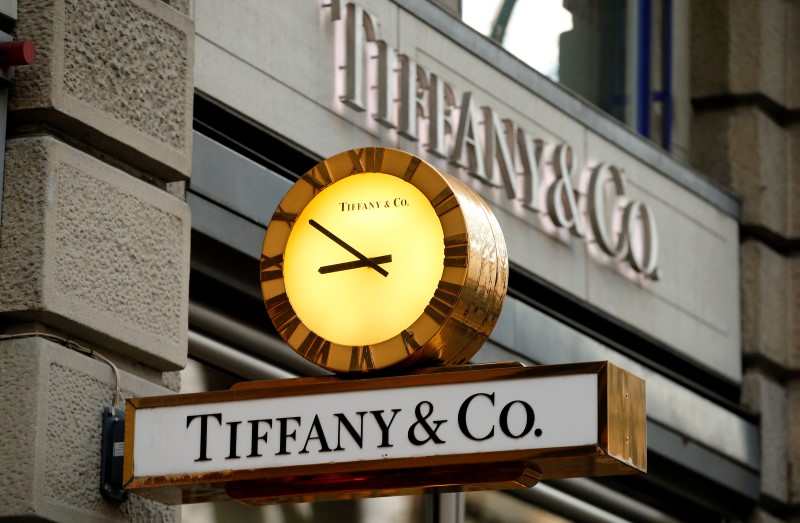 A clock is placed in front of a store of U.S. jeweller Tiffany at the Bahnhofstrasse shopping street in Zurich December 23, 2013. REUTERS/Arnd Wiegmann

(Reuters) - Upscale jeweler Tiffany & Co (NYSE: TIF) reported a better-than-expected profit for the holiday quarter as it raised prices and benefited from lower prices of diamonds, gold and silver.

Shares of the company, which became a household name due to the 1961 Hollywood classic "Breakfast at Tiffany's", rose as much as 4 percent in morning trading on Friday.

Weakness in the global economy and a strong dollar have hurt Tiffany and other luxury retailers such as Nordstrom Inc (NYSE: JWN), Neiman Marcus Group and Macy's Inc-owned (NYSE: M) Bloomingdale's as tourists shy away from buying high-end items.

Tiffany's reluctance to offer promotions also prevented it from attracting local shoppers looking for deals, especially in the holiday season.

The company warned that it expected profit per share to fall by 15-20 percent in the current quarter and by 5-10 percent in the second quarter, based on the trends seen so far.

However, earnings are expected to start growing from the second half of the year ending January 2017, Tiffany said.

The company will launch more new products and it has been pretty successful with recent product launches, Edward Jones analyst Brian Yarbrough said.

"Also, expectations were low and the stock's been beat up," he said, suggesting that Friday's rise in Tiffany's shares was a relief rally after a fall of 18 percent in the past 12 months.

The jeweler's gross margin rose to 63 percent in the fourth quarter from 60.8 percent a year earlier as raw material, labor and marketing costs declined.

However, sales fell 5.6 percent to $1.21 billion, the fifth straight quarter of decline.

Sales at stores open for at least a year fell 10 percent in the Americas, a bigger drop than the 9.4 percent analysts had expected, according to Consensus Metrix.

Tiffany sales have also slowed in Greater China as fewer Chinese tourists visit Hong Kong, one of its most important markets in the region, Mark Aaron, vice president of investor relations, said on a conference call.

In Europe, sales to tourists are expected to fall due to sociopolitical uncertainties, Chief Executive Frederic Cumenal said.

Excluding items, the company earned $1.46 per share, beating the average analyst estimate of $1.40, according to Thomson Reuters I/B/E/S.

(Reporting by Ramkumar Iyer and Yashaswini Swamynathan in Bengaluru; Editing by Kirti Pandey)