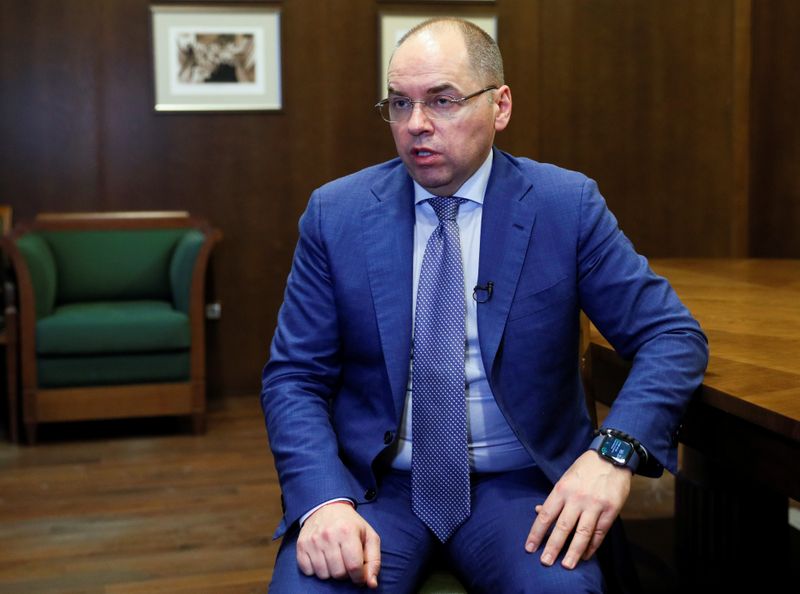 KYIV (Reuters) - The Ukrainian health minister said on Tuesday that Kyiv's coronavirus vaccine purchases were being hampered by "dirty information attacks" that have triggered a corruption investigation against his ministry.

Maksym Stepanov denied wrongdoing after the anti-corruption agency NABU launched an inquiry this month into the procurement of China's Sinovac vaccines through an intermediary importer, Lekhim.

Ukraine lags behind most European countries in securing COVID-19 vaccines and has yet to start mass vaccinations.

Stepanov said the accusations of corruption were costing the country dear.

"Due to dirty information attacks, we have already started seeing reluctance on the part of prospective vaccine companies regarding future cooperation," he told a morning briefing.

The disinformation aimed to disrupt Ukraine's vaccination campaign and force it to turn to Russia's Sputnik V vaccine, Stepanov added.

Kyiv has dismissed the idea of buying the Sputnik vaccine because of enduring anger over Russia's annexation of Crimea in 2014 and its support for pro-Russian rebels in eastern Ukraine.

However, the anti-graft agency said its investigation could not harm state procurement.

"So far, detectives have not carried out any investigative actions that could be regarded as hindering the procurement of vaccines," it said in a statement late on Tuesday.

"NABU will continue to investigate facts of probable abuse in all socially significant spheres of public life."

Last week, Reuters reported that shipments of the Sinovac vaccine to Ukraine could be delayed until April.

The corruption row deepened this week when the government announced new legislation on the agency's status, which a leading activist group, AntAC, described as revenge for the inquiry and a ruse to dismiss NABU chief Artem Sytnyk.

President Volodymyr Zelenskiy denied the agency's independence was under threat and said the wording of the legislation was discussed with the International Monetary Fund, which declined immediate comment.

The text of the bill, which needs parliament's approval to become law, has not been made public.

Any threat to the independence of NABU, which was set up with the backing of Western donors, could further derail the flow of foreign aid to Ukraine at a time when its economy has been hammered by virus lockdowns.

Ukraine is counting on more loans from a $5-billion IMF programme this year, but the IMF has said Kyiv needs to adopt more reforms first.

Zelenskiy adviser Mykhailo Podolyak said the new legislation was needed to tackle concerns the constitutional court outlined last year over how the agency was set up.

"We can say in advance that this bill does not pose any threat to NABU as an institution," he added in a statement.