Ukraine crisis: what next after the Blinken-Lavrov talks? 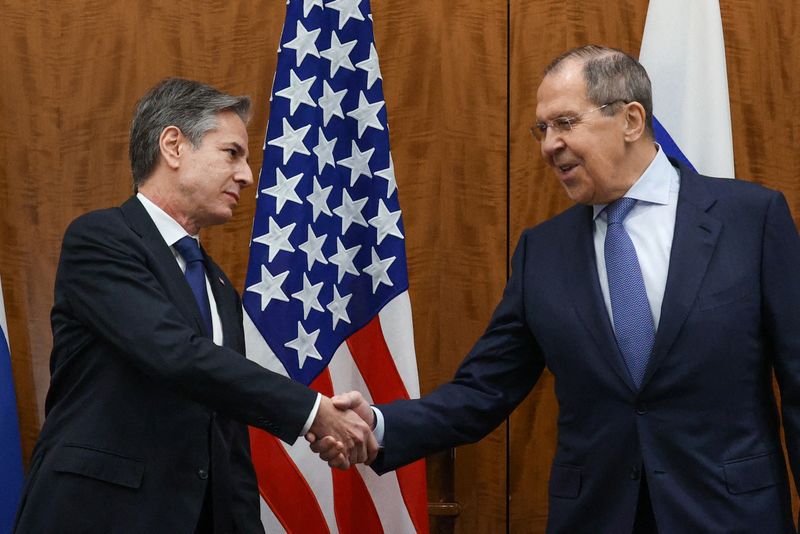 (Reuters) - Here is a snapshot of what to look out for next in the Ukraine crisis after the latest U.S.-Russia talks produced - as expected - no breakthrough.

Secretary of State Antony Blinken said the U.S. side would respond in writing next week to a set of security proposals that Russia presented in December, including a demand to bar Ukraine from ever joining NATO. A formal U.S. rejection could provide Russia with a pretext to move ahead with the unspecified military response it has threatened. Tatiana Stanovaya, head of political analysis firm R.Politik, said Moscow needed a written U.S. reply "as cast-iron proof of a refusal to provide Russia with security guarantees. This is partly a trap, of course, because any such written response will be used to discredit the U.S. negotiating position."

Blinken and Russian Foreign Minister Sergei Lavrov said they had agreed to further discussions after the U.S. side delivers its response, with the possibility of a meeting later between presidents Joe Biden and Vladimir Putin.

Russia has had an estimated 100,000 troops within striking distance of the Ukrainian border since November, while insisting it has no intention to invade. In the past week, it has moved troops and equipment thousands of miles from its far east region to Belarus to take part in what it calls joint exercises until Feb. 20. As Belarus borders Ukraine, this opens a new front for a potential Russian attack and ensures that diplomacy in the coming weeks will take place against the background of an ongoing show of Russian military force.

Russia's parliament will hold consultations next week on an idea to appeal to Putin to recognise two pro-Russian breakaway regions in eastern Ukraine as independent states. That would be a major escalation that would kill off diplomatic efforts and could serve as a legal pretext for Putin to send in troops to "protect" Russians there from Ukraine. Officially the Kremlin has reacted coolly to the parliamentary proposal so far, but it adds to Putin's available options and keeps the West guessing as to his true intentions. Tension remains high in and around the breakaway regions, where the United States has said Russia is plotting acts of provocation to create a pretext for invasion. Russia accuses Ukraine of planning to retake the areas by force, which it denies.

The United States and its allies have rallied to project unity after President Joe Biden caused consternation in Kyiv by saying an invasion of Ukraine would be a disaster for Moscow but a "minor incursion" could lead to a "fight" between Western allies on how to respond. The French and German foreign ministers are expected to visit eastern Ukraine in a further show of solidarity with Kyiv. French President Emmanuel Macron said the European Union, which has been largely sidelined in the crisis, should open its own track of diplomacy with Moscow. And Turkey's President Tayyip Erdogan says he wants to bring together the Ukrainian and Russian presidents and plans to visit Ukraine in early February. Russia, however, says it wants to move fast and is not prepared to let talks drag on indefinitely.