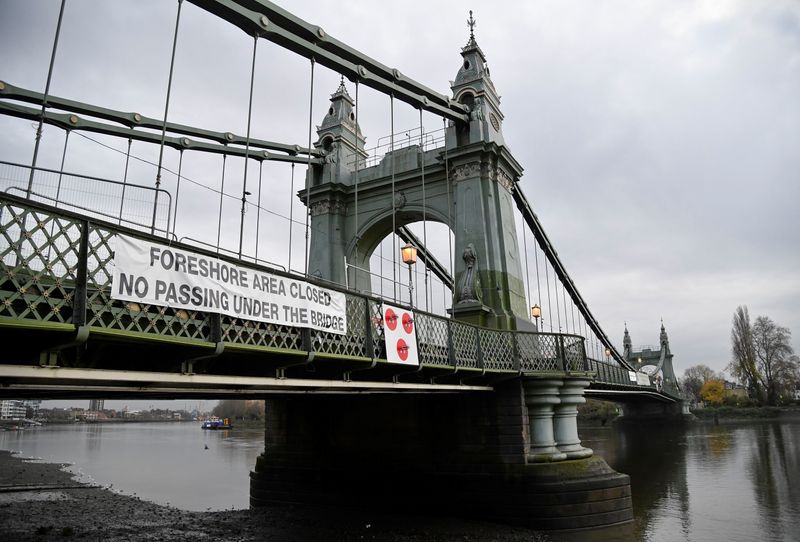 FILE PHOTO: A warning sign is seen attached to Hammersmith Bridge, the closure of which has caused the annual Oxford versus Cambridge boat race on the River Thames, which passes under the now structurally dangerous Victorian bridge, to be relocated outsid

LONDON (Reuters) - Uber Boat by Thames Clippers will run a service carrying pedestrians and cyclists across the River Thames at Hammersmith, in west London, reducing the disruption caused by the closure of a Victorian bridge, the cityâs transport authority said.

Built in 1887, Hammersmith Bridge has been closed to motor traffic since April 2019 following the discovery of micro-fractures in its brittle cast iron pedestals.

In August 2020, it was closed to pedestrians and cyclists and river traffic beneath it was banned after a sudden increase in the size of the fractures led to fears that it could collapse without warning.

Transport for London said on Tuesday the ferry service will have a minimum capacity of 800 passengers at peak times and the cost of a fare will be 1.55 pounds ($2.12). The service is expected to begin taking passengers at the end of the summer.

A riverboat service that runs through the centre of London, including stops at the London Eye and Canary Wharf, was rebranded Uber Boat by Thames Clippers last year.