UK's mutating variant a concern as it might undermine vaccines, scientist says 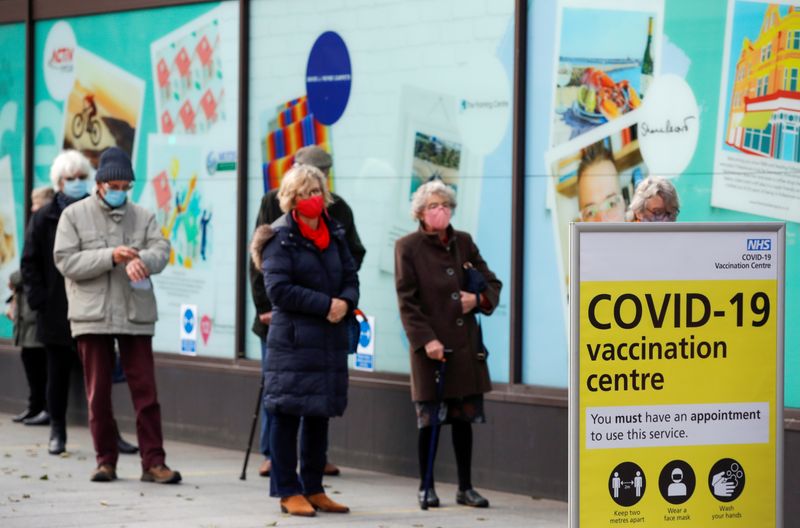 FILE PHOTO: People queue to receive the coronavirus disease (COVID-19) vaccine outside a closed down Debenhams store that is being used as a vaccination centre in Folkestone, Kent, Britain January 28, 2021. REUTERS/Andrew Couldridge

LONDON (Reuters) - The coronavirus variant first found in the British region of Kent is a concern because it is mutating and so could undermine the protection given by vaccines against developing COVID-19, the head of the UK's genetic surveillance programme said.

She also said the British variant was dominant in the country and was likely "to sweep the world, in all probability".

The coronavirus has killed 2.35 million people and turned normal life upside down for billions, but a few new worrying variants out of thousands have raised fears that vaccines will need to be tweaked and people may require booster shots.

Sharon Peacock, director of the COVID-19 Genomics UK consortium, said vaccines were so far effective against the variants in the United Kingdom, but that mutations could potentially undermine the shots.

"What's concerning about this is that the 1.1.7 variant that we have had circulating for some weeks and months is beginning to mutate again and get new mutations which could affect the way that we handle the virus in terms of immunity and effectiveness of vaccines," Peacock told the BBC.

"It's concerning that the 1.1.7, which is more transmissible, which has swept the country, is now mutating to have this new mutation that could threaten vaccination."

That new mutation, first identified in Bristol in southwest England, has been designated a "Variant of Concern", by the New and Emerging Respiratory Virus Threats Advisory Group.

Britain's chief scientific adviser, Patrick Vallance, said the Bristol variant had one of the same mutations as the South African. "It is not surprising that it has happened and it will happen elsewhere as well," he said on Wednesday.

There are so far 21 cases of that variant which has E484K mutation, which occurs on the spike protein of the virus, the same change as has been seen in the South African and Brazilian variants.

"One has to be a realist that this particular mutation has arisen in our kind of communal garden lineage now, at least five times - five separate times. And so this is going to keep popping up," Peacock said.

British people should expect to receive repeated vaccinations against COVID-19 in future to keep pace with mutations of the virus, Prime Minister Boris Johnson said on Wednesday.

The British variant, which is more infectious but not necessarily more deadly than others, was likely "to sweep the world", Peacock said.

The two COVID-19 vaccines developed by Pfizer/BioNTech and AstraZeneca protect against the main British variant.