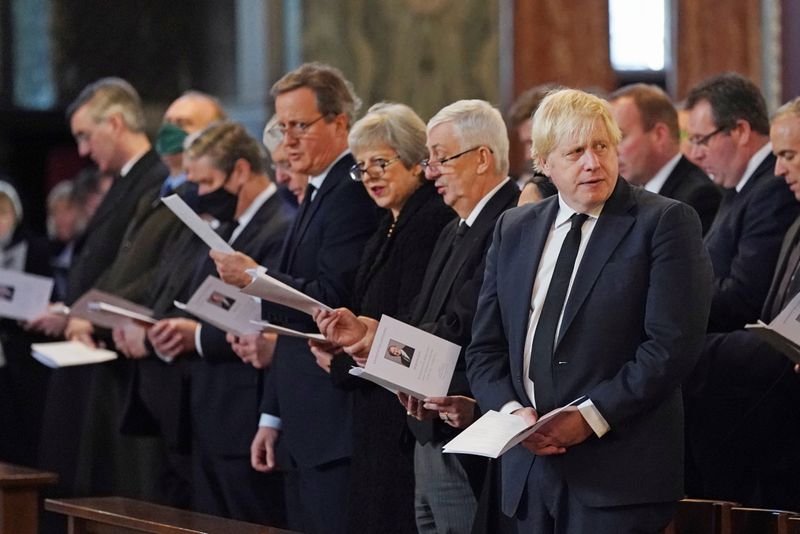 LONDON (Reuters) - Prime Minister Boris Johnson joined other senior British politicians and mourners on Tuesday for a funeral mass for David Amess, a lawmaker who was murdered at a meeting with voters last month.

Amess, a 69-year-old father of five, was stabbed to death at a church in his constituency at the regular meeting he held to discuss local issues.

The killing of Amess sent shockwaves through the British political system coming five years after another member of parliament (MP) was murdered on the street.

Johnson, who said some Cabinet ministers had broken down in tears when he broke the news to them of Amess's death, was among those present for the service at the Roman Catholic Westminster Cathedral in London conducted by Cardinal Vincent Nichols, the most senior Catholic leader in England and Wales.

Also among the congregation were former prime ministers Theresa May, David Cameron and John Major.

A message from Pope Francis was read out, in which the pontiff passed on his heartfelt condolences to Amess's family, praising the lawmaker's "devoted public service" as shown by his "deep concern for the poor and the disadvantaged".

"He showed what you can achieve as an MP to change lives of people up and down the country and he will be much, much missed," Johnson said in a tribute to the murdered lawmaker on Monday.

Amess, a member of Johnson's Conservative Party, was first elected to parliament to represent the town of Basildon in 1983, and then nearby Southend West in 1997. He was knighted by Queen Elizabeth in 2015 for his public service.

Ali Harbi Ali, 25, the man accused of committing the murder, which police say was a terrorism incident, is due to go on trial next year.