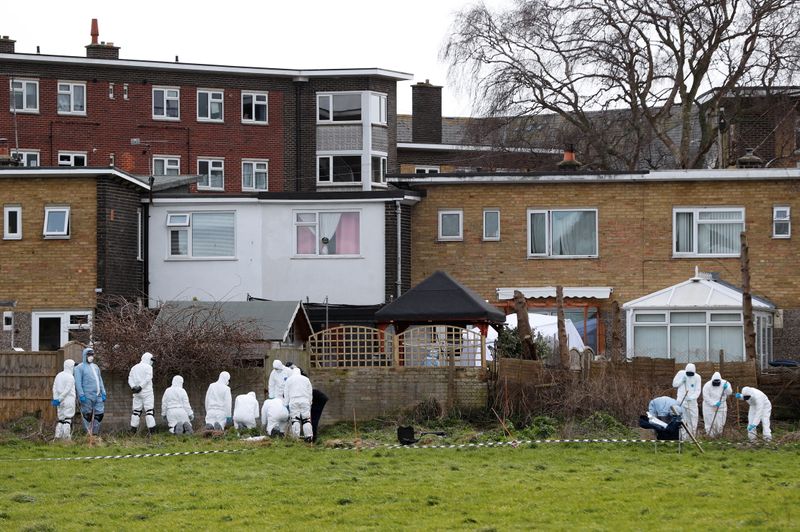 Police officers search an area of grass land behind a house, as the investigation into the disappearance of Sarah Everard continues, in Deal, Britain March 12, 2021. REUTERS/Paul Childs

LONDON (Reuters) - British police have charged an officer with the kidnap and murder of 33-year-old Sarah Everard, whose disappearance last week has sparked anger and fears among women about their safety.

Constable Wayne Couzens, 48, who guarded diplomatic buildings, will appear in court on Saturday. Everard disappeared while walking home from a friend's house in south London on March 3.

The Metropolitan police had confirmed that a body found in a wood outside London was that of the missing woman.

Her case has led to an outpouring of personal accounts by women of their own experiences and fears of walking streets alone at night, and a campaign for action to address this.

"The investigation continues of course," Assistant Commissioner Nick Ephgrave told reporters. "I would like to use this opportunity to encourage anyone that thinks they might have useful information to give, to get in contact with us."

He had said earlier in the day that he understood the hurt and anger sparked by the case. "Those are sentiments that I share personally," Ephgrave said. "I also recognise the wider concerns that are being raised quite rightly about the safety of women in public spaces in London and also elsewhere in the country."

Home Secretary (interior minister) Priti Patel said she would do all she could to protect women and girls following the outcry that has followed Everard's disappearance.

"Every woman & girl should be free to walk our streets without the slightest fear of harassment, abuse or violence," she said on Twitter.

However, police have been criticised by organisers of a planned "Reclaim These Streets" vigil on Saturday near to where Everard was last seen, after officers said it could not take place due to COVID-19 restrictions.

A woman in her 30s, who media said was the partner of Couzens, was released on police bail after having been detained on suspicion of assisting an offender.