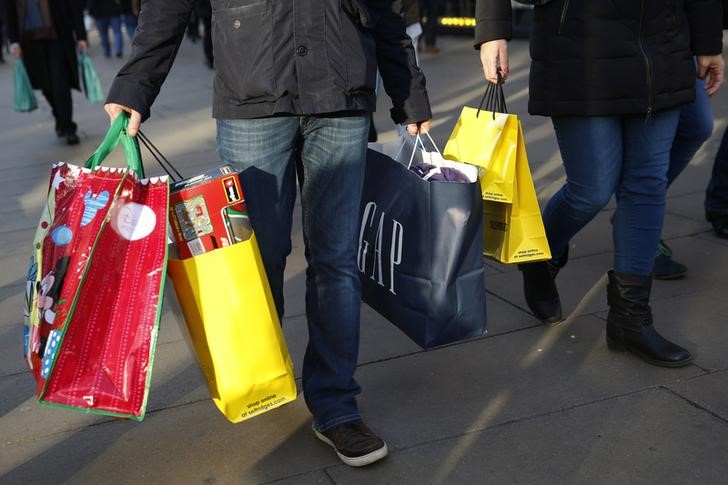 Shoppers carry bags along Oxford street during the final weekend of shopping before Christmas in London December 20, 2014. REUTERS/Luke MacGregor

LONDON (Reuters) - British consumer spending picked up last month but business confidence remained weak, according to two surveys on Monday that painted a mixed picture of the economy after Britons voted in a June 23 referendum to leave the European Union.

Official data has been scarce since the referendum but most business and consumer surveys have pointed to a sharp slowdown, prompting the Bank of England to cut rates last week for the first time since 2009 and to restart quantitative easing.

A survey by Visa UK, based on Visa credit and debit card data, showed consumer spending rose 1.6 percent in July compared with a year ago, up from June's 0.9 percent increase and the biggest rise in three months.

Seasonally-adjusted spending increased 1.1 percent on the month, the strongest since January and reversing June's dip.

"Consumers will really feel the pinch on their incomes next year, when inflation is shooting up. We are more worried about consumer spending next year than over the next few months," he said.

"We're much more worried about business investment over the next few quarters. That is what could really fall sharply and drag the economy into recession."

A second survey published on Monday by business advisers BDO showed a measure of business optimism that predicts growth six months ahead fell to its lowest level in more than three years.

Business optimism fell to 97.9 in July from 98.9 in June, though still some way above the 95 mark denoting contraction, the survey showed.

The numbers, based on the weighted average of Britain's main business surveys, suggested "the initial impact of the Brexit vote has been less severe than expected", according to the survey by accountants and business advisers BDO.

But optimism in the manufacturing sector fell to a four-year low of 81.0 in July from 83.8 in June, well below the 95 mark that points to a potential recession.

Britain's economy unexpectedly picked up speed in the second quarter, but recent surveys have shown the manufacturing, services and construction activity are all poised for a sharp slowdown post-Brexit.

Consumer confidence suffered its sharpest drop last month since March 1990, according to a closely-watched gauge from market research company GfK.

On a brighter note, a report published on Monday by travel information firm ForwardKeys showed the roughly 10 percent fall in sterling since the EU referendum was attracting more international visitors into Britain.

Britain will publish official data on manufacturing and industrial production for June on Tuesday, which will cover only part of the period after the referendum.

The Bank of England expects the British economy to stagnate for the rest of 2016 and to suffer weak growth next year, but is not predicting a recession.