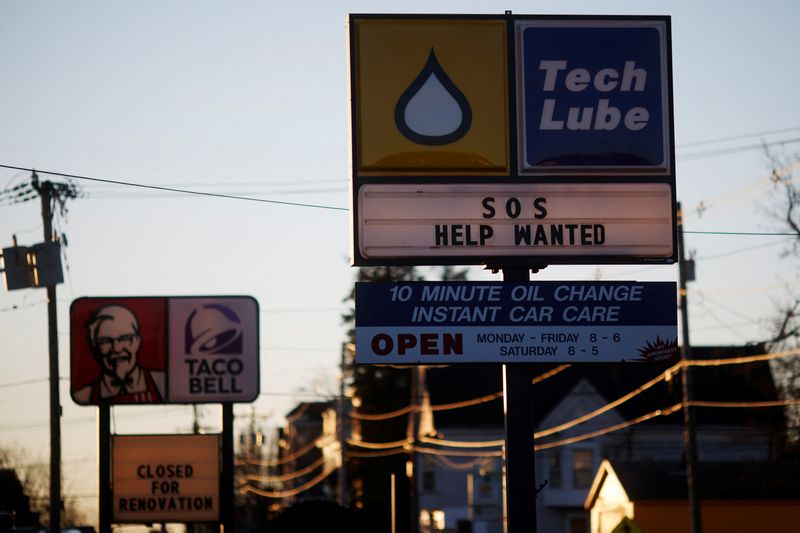 WASHINGTON (Reuters) - U.S. employers maintained a brisk pace of hiring in March, driving the unemployment rate to a new two-year low of 3.6% while also boosting wages, resulting in a further tightening of labor market conditions and opening the door to a hefty 50 basis points interest rate hike from the Federal Reserve in May.

The 11th straight month of job gains in excess of 400,000 underscored the economy's resilience even as growth appears to have slowed considerably in the first quarter under the weight of high inflation amid snarled supply chains.

"Despite concerns about inflation and the Russia-Ukraine war, American businesses are still hiring at full throttle, while more people are returning to the labor force," said Sal Guatieri, a senior economist at BMO Capital Markets in Toronto.

"That's great news for the economy. However, the labor market is only getting tighter and wages are on a clear upward track, fanning the inflation flames. The Fed has every reason to go big or go home on May 4."

The survey of establishments showed that nonfarm payrolls increased by 431,000 jobs last month. The economy created 95,000 more jobs in January and February than initially estimated.

Overall employment is now 1.6 million jobs below its pre-pandemic level, with many economists predicting all the jobs lost will be recouped by July. Economists polled by Reuters had forecast payrolls increasing 490,000 in March. Estimates ranged from as low as 200,000 to as high as 700,000.

Worker demand is being driven by a sharp decline in COVID-19 infections, which has resulted in restrictions being lifted across the country. There is no sign yet that the Russia-Ukraine war, which has pushed gasoline prices above $4 per gallon, has impacted the labor market.

The broad increase in payrolls was led by the leisure and hospitality industry, which added 112,000 jobs. Professional and business services payrolls increased by 102,000 jobs, hoisting employment in the sector 723,000 above its pre-pandemic level.

Stocks on Wall Street were lower. The dollar gained versus a basket of currencies. U.S. Treasury yields rose, with the closely watched yield curve between two-year and 10-year notes inverting for the third time this week amid concerns that tight monetary policy could tip the economy into recession.

The Fed last month raised its policy interest rate by 25 basis points, the first hike in more than three years. Policymakers have been ratcheting up their hawkish rhetoric, with Fed Chair Jerome Powell saying the U.S. central bank must move "expeditiously" to hike rates and possibly "more aggressively" to keep high inflation from becoming entrenched.

With a near record 11.3 million job openings on the last day of February, payrolls growth could remain strong this year.

Job gains averaged 562,000 per month in the first quarter. But inflation is eating into growth, with gross domestic product estimates for the January-March quarter mostly below a 1.0% annualized rate, a sharp slowdown from the fourth quarter's brisk 6.9% pace.

Annual inflation rose in February by the most in 40 years. Despite the anxiety in the bond market, economists expect the expansion to continue.

Many viewed the Fed's massive holdings of Treasuries and mortgage-backed securities as distorting the yield curve moves.

Some noted that real yields remained negative, while others argued that the two-year/five-year Treasury yield curve was a better indicator of a future recession. This segment has not inverted.

"The amazingly strong job gains this year point to a solid economy," said Joel Naroff, chief economist at Naroff Economics in Holland, Pennsylvania. "What we are likely seeing is a deceleration back toward more normal levels of growth after having posted clearly unsustainable robust numbers."

The labor pool continued to steadily expand in March.

The household survey, from which the unemployment rate is derived, showed 418,000 entered the labor force last month. About 249,000 women, 20 years of age and older, joined the workforce. That was more than offset by a 736,000 surge in household employment.

As result, the unemployment rate dropped two-tenths of a percentage point to 3.6%, the lowest since February 2020.

According to a report from global outplacement firm Challenger, Gray & Christmas on Thursday, the skyrocketing cost of living was "causing workers who were depending on savings or investments to seek out paid employment."

There was a significant reduction in those experiencing long spells of unemployment as well as those being unable to work because of the pandemic.

With workers still scarce, average hourly earnings increased 0.4% after edging up 0.1% in February. That lifted the annual increase to 5.6% from 5.2% in February. But the workweek shortened to 34.6 hours from 34.7 hours in February.