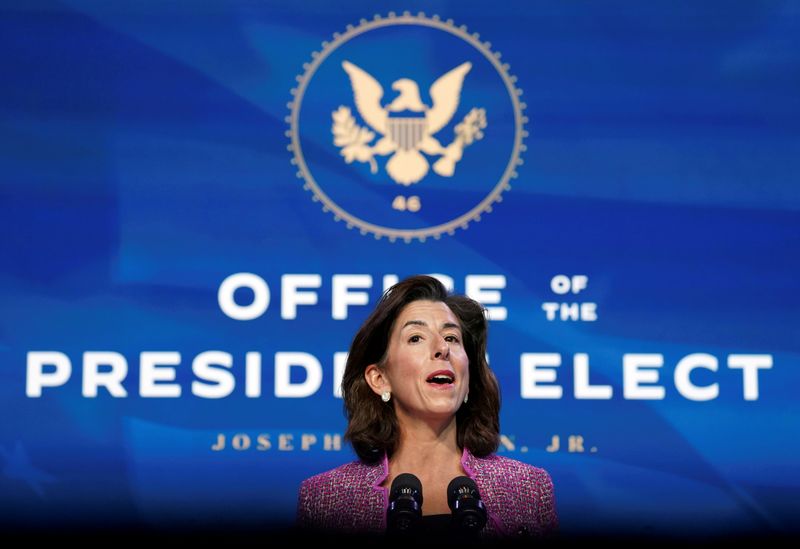 WASHINGTON (Reuters) - The U.S. Commerce Department said on Wednesday that it has served subpoenas on multiple Chinese companies that provide information and communications technology services in the United States to see if they pose a national security risk.

"Beijing has engaged in conduct that blunts our technological edge and threatens our alliances," Commerce Secretary Gina Raimondo said in statement.

The subpoenas will gather information to "allow us to make a determination for possible action that best protects the security of American companies, American workers, and U.S. national security."

In response, China urged the United States to "stop overstretching the concept of national security to politicize economic issues," foreign ministry spokesman Zhao Lijian told a news briefing on Thursday, adding that China will take measures to safeguard the rights and interests of Chinese companies.

The U.S. statement did not name any companies. China's Huawei Technologies and ZTE Corp were targeted by the previous administration of Donald Trump for removal from the U.S. telecoms infrastructure.

The Commerce Department issued an interim final rule in the final days of the Trump administration aimed at addressing information and communications technology supply chain concerns and said it would become effective after a 60-day period of public comment.

Last month, the department said it would continue to accept public comment on the rule until March 22, when it would go into effect. The subpoenas would not have an impact on the interim final rule's timing, a department official said on Wednesday.

The U.S. Chamber of Commerce and groups representing major industries raised concerns in a letter to the Commerce Department in January that the interim rule gave the government "nearly unlimited authority to intervene in virtually any commercial transaction between U.S. companies and their foreign counterparts that involves technology."