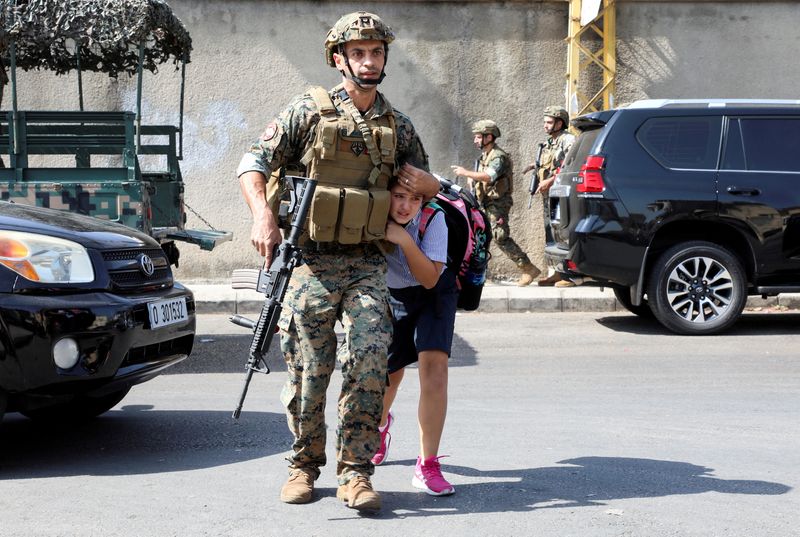 FILE PHOTO: An army soldier helps a schoolgirl get to her parents, after a gunfire erupted in Beirut, Lebanon October 14, 2021. REUTERS/Mohamed Azakir//File Photo

WASHINGTON (Reuters) - The United States plans to reroute $67 million of military assistance for Lebanon's armed forces to support members of the military as the country grapples with financial meltdown.

According to a notification sent to Congress, the State Department intends to change the content of previously appropriated foreign military funding for Lebanon to include "livelihood support" for members of the Lebanese military, citing economic turmoil as well as social unrest.

The news was praised in Washington.

"It is in the United States' national security interest to help these servicemen make ends meet and continue supporting the Lebanese people, and I'm really glad to see the administration putting our security assistance dollars to Lebanon toward that goal," Democratic Senator Chris Murphy said in a statement.

Sunni Muslim leader Saad al-Hariri announced his departure from Lebanese politics this week, opening the way for the Shi'ite Hezbollah to extend its sway over the country.

Hariri's departure opens a new phase https://www.reuters.com/world/middle-east/lebanons-bahaa-rafik-al-hariri-says-he-will-continue-his-fathers-journey-2022-01-28 in Lebanon's politics, governed by a system of sectarian power-sharing, and adds to uncertainty in a country suffering a financial crisis that marks its biggest threat to stability since the 1975-90 civil war.

More than half of Lebanon's 6 million people have fallen into poverty. The World Bank says it is one of the sharpest modern depressions, with the currency plunging more than 90% and the financial system paralyzed.

Discontent has been brewing in the security forces as Lebanon's currency has slumped, driving down soldiers' wages. Many have taken extra jobs, and some have quit.