U.S. lawmakers will set up commission to probe Jan. 6 attack on Capitol: Pelosi 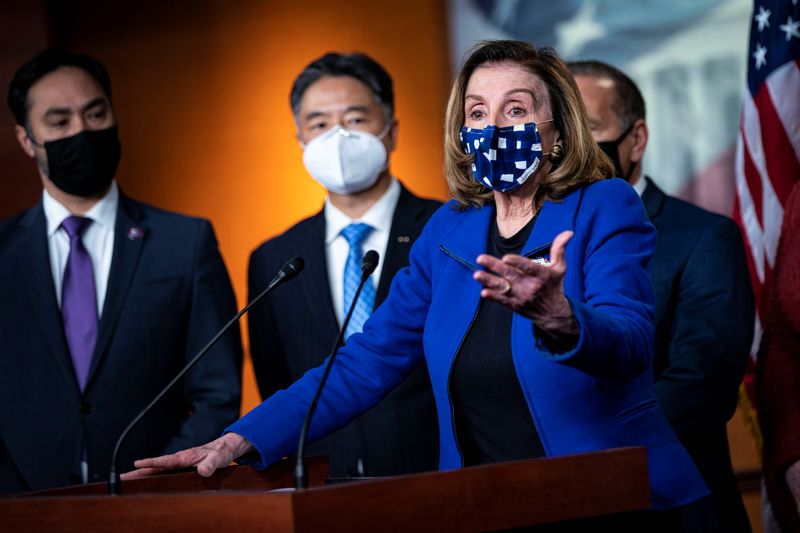 FILE PHOTO: U.S. Speaker of the House Nancy Pelosi (D-CA) speaks during a news conference with House impeachment managers on the fifth day of the impeachment trial of former U.S. President Donald Trump, on charges of inciting the deadly attack on the U.S.

WASHINGTON (Reuters) - U.S. House Speaker Nancy Pelosi said on Monday lawmakers will establish an outside, independent commission to review the "facts and causes" related to the deadly Jan. 6 attack on the U.S. Capitol by supporters of then-President Donald Trump.

Pelosi said in a letter to lawmakers that the commission would be modeled on a similar one convened after the Sept. 11, 2001 attack on New York and the Pentagon. Pelosi said the panel will also look at the "facts and causes relating to the preparedness and response of the United States Capitol Police and other federal, state, and local law enforcement."

She has tasked retired U.S. Army Lieutenant General Russel HonorÃ© with assessing security needs of the Capitol in the aftermath of the attack. Based on his interim findings, she said Congress must allocate additional funds "to provide for the safety of members and the security of the Capitol."

She added: "It is clear from his findings and from the impeachment trial that we must get to the truth of how this happened."

More than a month after the attack that left five dead as pro-Trump supporters stormed the U.S. Capitol and sought to disrupt the certification of Joe Biden's victory as president, the Capitol complex remains guarded by more than 5,000 National Guard troops and ringed with eight-foot fences rimmed with razor wire. The troops are expected to remain through mid-March.

Many lawmakers and Washington Mayor Muriel Bowser have urged congressional leaders not to adopt permanent fencing or permanent military security.

More than 200 people have been charged with federal crimes in the bloody assault on Congress, which led to Trumpâs impeachment trial on a charge of inciting insurrection. Trump was acquitted on Saturday on a vote of 57-43, as seven Republican senators joined Democrats in favor of conviction, though short of the required majority.