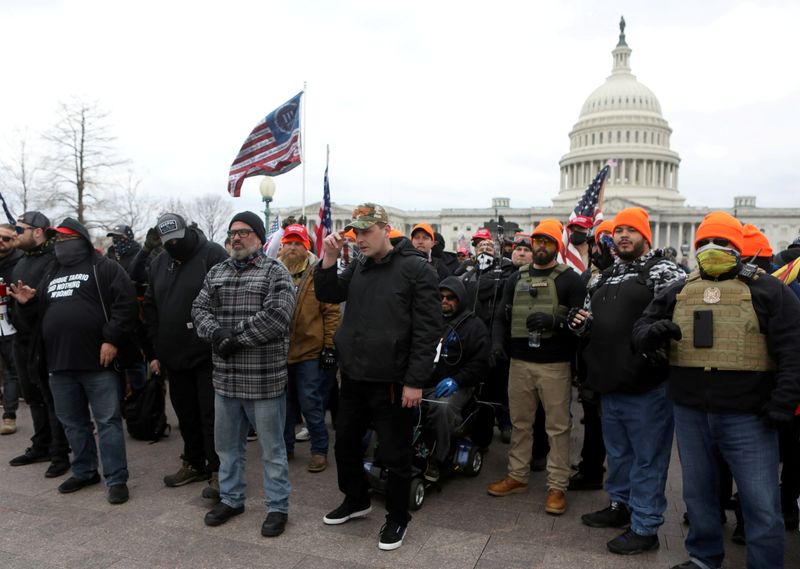 FILE PHOTO: Proud Boys member Joe Biggs (front row second from left in grey plaid shirt) poses with other members before he was later arrested for involvement in the storming of the U.S. Capitol building in Washington. D.C., U.S. Picture taken January 6,

WASHINGTON (Reuters) - A federal judge on Monday ordered that two prominent leaders of the far-right Proud Boys group be detained for their roles in storming the U.S. Capitol, saying they posed a danger to the community and could not be trusted to abide by strict conditions of release.

The ruling by U.S. District Judge Timothy Kelly marked a small victory for the Justice Department, which had failed in two previous efforts to persuade the courts to detain Ethan "Rufio" Nordean of Auburn, Washington.

Kelly also ordered detention for one of Nordean's co-defendants, Joseph Biggs of Ormond Beach, Florida, who has remained in home confinement since his arrest in January.

The judge said in his ruling that Nordean and Biggs are charged with "gravely serious matters" and their leadership roles and lack of remorse all weighed in favor of detention.

In addition, Kelly added: "The evidence is overwhelming that Nordean and Biggs had a plan for that day."

A magistrate judge on Monday postponed a detention hearing for Charles Donohue, a third defendant in the case, saying he wanted to first review the transcript of Kelly's ruling on Nordean and Biggs before making a decision.

Prosecutors have charged more than 410 people in the Jan. 6 attack on the Capitol.

Nordean's defense attorneys have argued their client does not pose a threat, and pointed to flaws in the government's evidence.

In March, they provided a sworn statement from a former lead singer for the punk band the Misfits who said Nordean had invited him to play a private concert for the Proud Boys at their rowhouse rental on the afternoon of Jan. 6. They argued that plan was contrary to prosecutors' claims their client had plotted to topple the government.

Nordean's lawyers also pointed to seemingly contradictory statements that former acting U.S. Attorney Michael Sherwin made during an appearance on CBS' "60 Minutes," in which Sherwin said the government was still trying to determine whether rioters had a premeditated plan to breach the Capitol.

Kelly said Sherwin's interview was "highly unprofessional," but said he did not think it significantly weakened the prosecution's case.