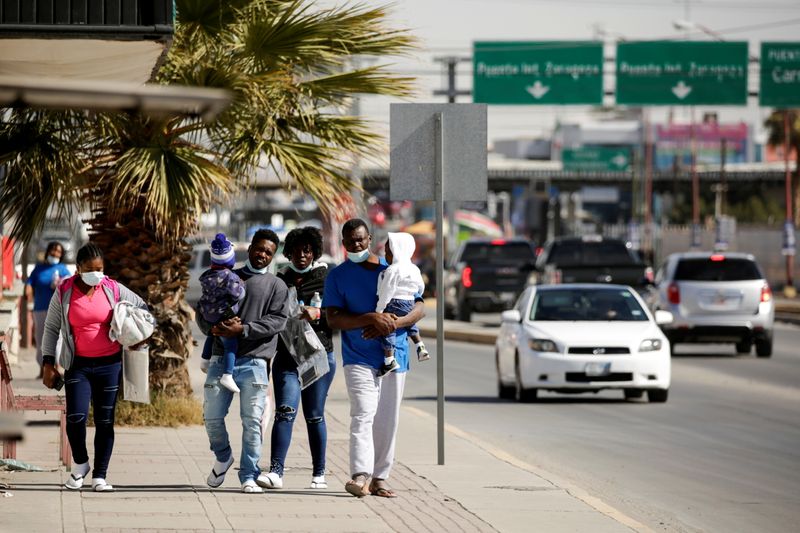 Migrants from Haiti walk near the Zaragoza-Ysleta international border bridge after being deported from the United States, in Ciudad Juarez, Mexico February 3, 2021. REUTERS/Jose Luis Gonzalez

CIUDAD JUAREZ (Reuters) - U.S. authorities returned dozens of Haitians to the Mexican border city of Ciudad Juarez from El Paso, Texas, on Wednesday, a move that appeared to contradict a policy agreement in place with Mexico brokered under the previous U.S. administration.

Luis Garcia, a director at the Chihuahua state government agency COESPO in Mexico, which oversees attention to migrants, confirmed the return of dozens of Haitians by U.S. immigration authorities.

"The situation seems somewhat extraordinary for us, because they don't speak Spanish, and it puts them in a situation in which they are increasingly exposed to risk," Garcia said.

As the coronavirus pandemic spread in March, the United States partially closed its border to asylum seekers by invoking a public health law known as "Title 42." Mexico agreed to allow U.S. authorities to return Guatemalans, Hondurans, and Salvadorans who had previously transited through its territory.

But the agreement between the two countries was limited to those three nationalities and Mexicans, according to the text of a March 21 document published by Mexico's foreign ministry.

Under Title 42, the United States generally flies migrants of other nationalities back to their country of origin.

More than a dozen Haitian migrants from the group told Reuters they'd been held by U.S. immigration authorities for three or four days and then returned without any documentation of their expulsion.

"They returned us with nothing, they threw away our clothes and my children's shoes," said Johan Decopin, from Haiti, who was returned to Ciudad Juarez on Wednesday with her husband and three children. "We asked for asylum but they told us no."

Many of the group were wearing the same black sandals, which they said they'd received from U.S. immigration authorities, a Reuters witness said.

Immigrant advocates said as well as the expulsion of Haitians on Wednesday they had seen more South American and Caribbean migrants being returned to Mexico amid a rise in returns under Title 42 in some regions since Biden took office.

"Up to 140 people are being returned to Baja California each day," said Esmeralda Siu, coordinator of the Pro-Migrant Defense Coalition, which represents a series of migrant shelters in the Mexican state. "From what we're seeing they are returning Venezuelans, Colombians, and Peruvians (to Mexico)," she added.

Asked about the return of the Haitians, U.S. Customs and Border Protection confirmed that 86 people were expelled to Mexico from the El Paso Sector, although it did not specify their nationalities. Mexico's foreign ministry and federal immigration agency did not respond to requests for comment.

Taylor Levy, an immigration attorney working with clients in El Paso, expressed confusion about the return of the Haitians.

"This violates the agreements between the U.S. and Mexico as they have been announced by both governments," she said.