U.S. economy not letting war, pandemic get in the way of a good time 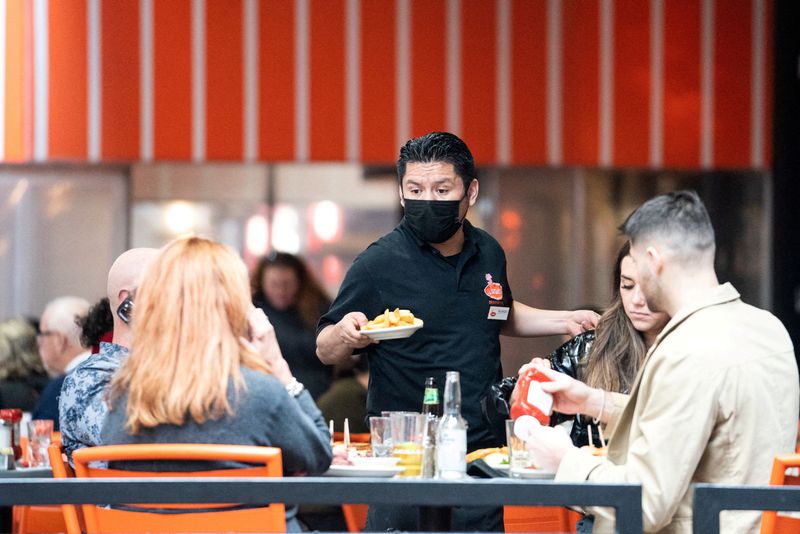 WASHINGTON (Reuters) -Fear that the war in Ukraine would tilt the U.S. economy towards a 1970s-style bout of stagflation has given way to signs that Americans plan to keep traveling, returning to restaurants, and continuing a steady if still incomplete return to "normal."

The latest nonfarm payrolls report released Friday showed employers added 431,000 jobs in March and the unemployment rate fell to 3.6%, continuing a strong run of hiring that has left key aspects of the U.S. labor market "little different" from where they were before the pandemic, the Bureau of Labor Statistics reported.

An additional nearly 600,000 people were employed or looking for work in March compared to the month before, adding to a recent steady rise in labor supply that Fed officials see as key to helping ease inflation, keeping hiring on track, and avoiding a joint run-up in both wages and prices.

There remain major gaps in the post-pandemic economy. Downtown office buildings are still underused in what may be one of the more persistent changes as workers and employers realized many jobs could be done from home. Businesses still struggle to find supplies and hire workers at a time of record job openings.

But following a winter in which war, a new coronavirus surge, and already high inflation painted a potentially grim picture of even faster rising prices and slowing growth, recent government and high-frequency data show an expansion seemingly poised to roll on.

Gasoline consumption did edge down in March as prices nationally topped $4 a gallon, but Energy Information Administration data still shows gasoline use remains around 95% of pre-pandemic levels, roughly where it has been since the start of 2022.

Inflation, which is running at three times the Federal Reserve's 2% target, may mean consumers are getting less for their money. Spending data for February showed consumption actually declined on an inflation-adjusted basis, and energy sapped a larger share of household budgets.

The drop, however, came after a spending surge in January, and analysts and Fed policymakers this week agreed that neither global events nor the ongoing pandemic have put much of a dent in the U.S. economy.

"To this point, high gasoline prices have not led to demand destruction," analysts from RBC Capital Markets wrote this week. Between rising wages and savings still flush for many households from pandemic assistance payments, "the average American has never been more financially able to absorb $4 gasoline than today."The outbreak of war in Eastern Europe threatened to further fan inflation, currently running at a four-decade high. The prospect of a more aggressive Fed response to the surge in prices amplified talk of a "hard landing" - a recession sparked by rising interest rates, tighter credit, and a subsequent pullback in business and household spending.

Still, what economists and Fed officials regard as more telling signals from the bond market remained healthy.

"It's premature to start the recession countdown," wrote Jefferies analysts Aneta Markowska and Thomas Simons. "This does not look like a late-cycle economy ... It's a mid-cycle economy and the business cycle has room to run."

Far from hitting the brakes on the economy, the Fed's target policy rate remains far below the level that would discourage spending or investment. The U.S. central bank increased its federal funds rate by a quarter of a percentage point on March 16, lifting it from the near-zero level set in March 2020 to offset the economic impact of the pandemic.

Interest rates are expected to rise steadily from here, with Fed officials projecting increases of at least a quarter of a percentage point at each of their six remaining policy meetings this year - with the potential for even larger increases that could, by the end of the year, remove any remaining Fed support for economic growth.

Fed policymakers this week said they will carefully watch how those anticipated rate hikes impact inflation and economic growth, and be poised either to raise borrowing costs faster if prices don't respond or pause them if it is appropriate.

But they emphasized the economy seems resilient at this point, with companies perhaps struggling to find workers and supplies but also filling record demand, booking strong profits, and lifting wages.

By some measures the return to normal is here. Oxford Economics recently "retired" its weekly economic recovery tracker because the data it indexed, measuring employment, financial conditions, mobility and other issues, were "essentially back to pre-pandemic levels," Oxford analyst Oren Klachkin wrote.

There are signs also that larger changes, expected by economists as part of a "normalizing" economy, are beginning to take shape.

Spending on services jumped in February while declining for goods, a rotation Fed officials have been expecting and which may be helpful in the inflation fight. Consumers bought record amounts of goods during the pandemic, when service spending options were limited by social-distancing rules and measures that shuttered many businesses. High demand for cars, bikes, appliances and other goods clashed with a global supply system unable to keep pace, resulting in rising prices.

Foot traffic data from cellphone tracking firm Unacast showed visits to home goods and electronics stores as well as auto dealers are down significantly in 2022 compared with last year, while the hotel sector was rebounding quickly.

There are even some tentative signs inflation may be moving in the right direction.

Data for February showed year-over-year prices continuing to increase, but a key measure of month-to-month inflation fell one-tenth of a percentage point.

One month does not make a trend, but at a news conference following the end of the March 15-16 policy meeting, Fed Chair Jerome Powell said that sort of month-to-month decline is "really what we're looking for."

(Reporting by Howard Schneider;Editing by Dan Burns and Paul Simao)