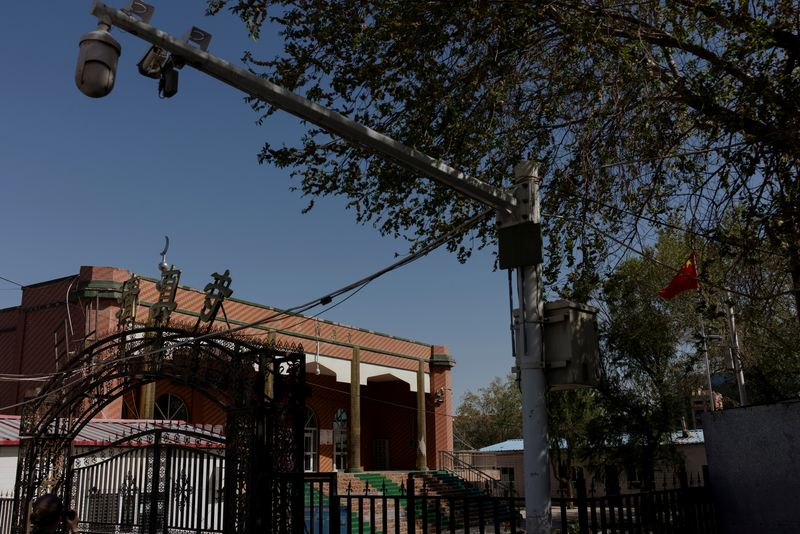 FILE PHOTO: A Chinese national flag flies outside the former Xinqu Mosque that had its minarets and central dome removed in Changji outside Urumqi, Xinjiang Uighur Autonomous Region, China, May 6, 2021. Picture taken May 6, 2021. REUTERS/Thomas Peter/Fil

WASHINGTON (Reuters) - A bipartisan U.S. congressional commission has called on Hilton Worldwide not to allow its name to be associated with a hotel project on the site of a mosque bulldozed by authorities in China's Xinjiang region, where Washington says minority Muslims have been victims of genocide.

In a letter on Thursday to Christopher Nassetta, president and CEO of Hilton Worldwide Holdings Inc, Democratic Senator Jeff Merkley and Representative Jim McGovern raised concerns about reports that a Hampton by Hilton hotel was being constructed on the site of the mosque destroyed in 2018 in Xinjiang's Hotan prefecture.

"The site is emblematic of the Chinese government's campaign of widespread destruction of Uyghur religious and cultural sites in the XUAR and official efforts to eradicate Uyghurs' religious and cultural practices," the letter said, referring to minority Uyghur Muslims and the Xinjiang Uyghur Autonomous Region.

The letter, a copy of which was made available to Reuters, was co-signed by the senior Congressional-Executive Commission on China Republicans, Senator Marco Rubio and Representative Jim Smith.

Hilton Worldwide did not immediately respond to emailed requests for comment.

The letter said the destruction of Uyghur religious and cultural sites had contributed to the U.S. government's determination that genocide and crimes against humanity were being perpetrated against Muslims in Xinjiang.

"Hilton should not allow its name to be used to perpetuate and promote the cultural erasure and repression of the millions of Uyghurs living in the XUAR," it said.

The Council on American-Islamic Relations, the largest U.S. Muslim advocacy organization, this week called on Hilton shareholders to seek details on the hotel plan, revealed in June by Britain's Daily Telegraph.

It quoted Hilton as saying the hotel was a franchise development overseen by a Chinese firm, Huan Peng Hotel Management, which said it had purchased the land as a vacant lot via a public auction. The firm added that it would "comply fully with all local laws, authorities and Hilton brand development standards."

According to CECC research, authorities in Xinjiang demolished or damaged around 16,000 mosques and more than half of the regionâs other religious sites such as shrines and cemeteries in recent years.