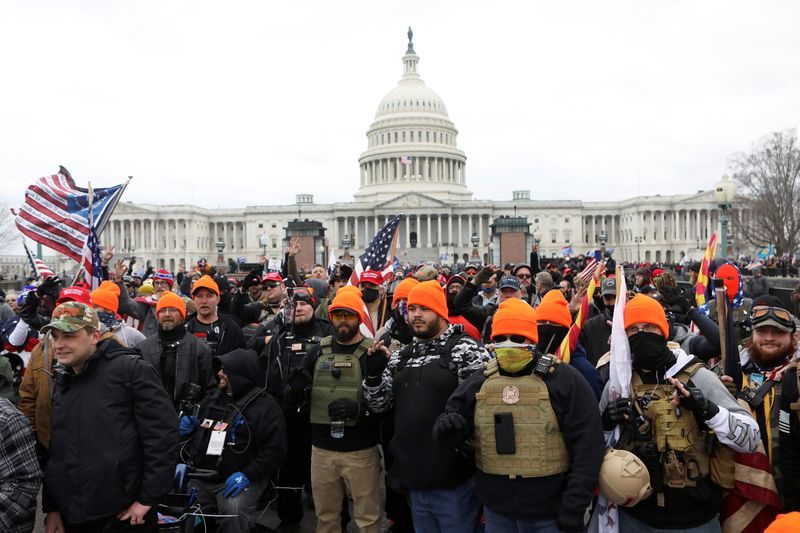 FILE PHOTO: Members of the far-right group Proud Boys make 'OK' hand gestures indicating "white power" as supporters of U.S. President Donald Trump gather in front of the U.S. Capitol Building to protest against the certification of the 2020 U.S. presiden

WASHINGTON (Reuters) - The U.S. Justice Department arrested and charged a top member of the Seattle chapter of the far-right Proud Boys group on Wednesday over allegations he had a role in the storming of the U.S. Capitol on Jan. 6 by pro-Trump followers.

Separately, two other Proud Boy members including the leader of the group's Hawaii Chapter were indicted by a federal grand jury for conspiracy to obstruct Congress, the Justice Department said.

Prosecutors said that 30-year-old Ethan Nordean, also known as Rufio Panman, could face up to 20 years in prison if he is convicted on a charge of impeding an official government proceeding. He also faces other charges, including aiding and abetting.

Nordean did not enter a plea and his attorney did not indicate at a federal court hearing in Washington state whether her client intends to contest the charges. The judge scheduled a hearing for Monday to review a request by the government to hold Nordean in custody pending trial.

Nordean is the self-proclaimed "Sergeant of Arms" for the Seattle chapter of the Proud Boys, an extremist group that describes itself as a "pro-Western fraternal organization for men who refuse to apologize for creating the modern world," prosecutors said.

Nordean was arrested only hours after Canada named the Proud Boys a terrorist entity, saying that while the group has never mounted an attack in Canada, domestic intelligence forces have become increasingly worried about it.

The Proud Boy's founder, Gavin McInnes, is a Canadian who lives in the United States.

The indictment against Nicholas Ochs, 34, of Honolulu, and Nicholas DeCarlo, 30, of Burleson, Texas, said the two men agreed before Jan. 6 to travel to Washington to "stop, delay and hinder" the certification of President Joe Biden's election victory, the Justice Department said. The riot led to five deaths, including a Capitol Police officer.

After entering the Capitol, Ochs and DeCarlo posted videos of their actions on social media in real time and "defaced the U.S. Capitol by scrawling onto its Memorial Door the words 'MURDER THE MEDIA'," it said.

If convicted, DeCarlo and Ochs face a maximum sentence of 20 years in prison, the Justice Department said. Both men were arrested last month.

Nordean's family, in a statement cited by the Seattle Times, said: "We have tried for a long while to get our son off the path which led to his arrest today - to no avail."

Bidenâs administration has warned that domestic extremism is a growing threat following the Capitol rampage, a sharp departure from the way former president Donald Trump regarded groups such as the Proud Boys and Oath Keepers.

In a September pre-election debate with Biden, Trump told the Proud Boys to âstand back and stand by.â

The FBI has been looking particularly closely at the Proud Boys, the Oath Keepers and other far-right groups and anti-government militias as they investigate the Capitol riots.

Earlier on Wednesday, Reuters reported that the Justice Department is in the early stages of exploring whether it might be able to charge members of far-right groups involved in the storming of the Capitol under a federal law usually used against organized crime, according to two law enforcement sources.

Last month, the government secured an indictment against two other Proud Boy members - Dominic Pezzola and William Pepe - on charges they conspired to impede Capitol Police on Jan.6.

Prosecutors have also separately charged Proud Boys member Joseph Biggs, who prosecutors say was photographed alongside Nordean as they marched along Constitution Avenue on Jan. 6.

In the criminal complaint against Nordean, investigators shared snippets of his posts from his Parler social media page which they said showed that "he and other Proud Boys members were planning in advance to organize a group that would attempt to overwhelm police barricades and enter the United States Capitol building."

Then, two days before the riots, he wrote: âLet them remember the day they decided to make war with us,â according to the complaint.

That same day, he uploaded a video podcast where he interviewed an unnamed person about their plans to participate in the rally in Washington, D.C.

In the exchange, the two discussed the idea of wearing disguises instead of the Proud Boys' usual identifying black and yellow colors, and the unnamed person also thanked supporters for their "financial contributions."

None of the other Proud Boy defendants have entered pleas yet. Pezzola and Pepe are due to appear in court next week.