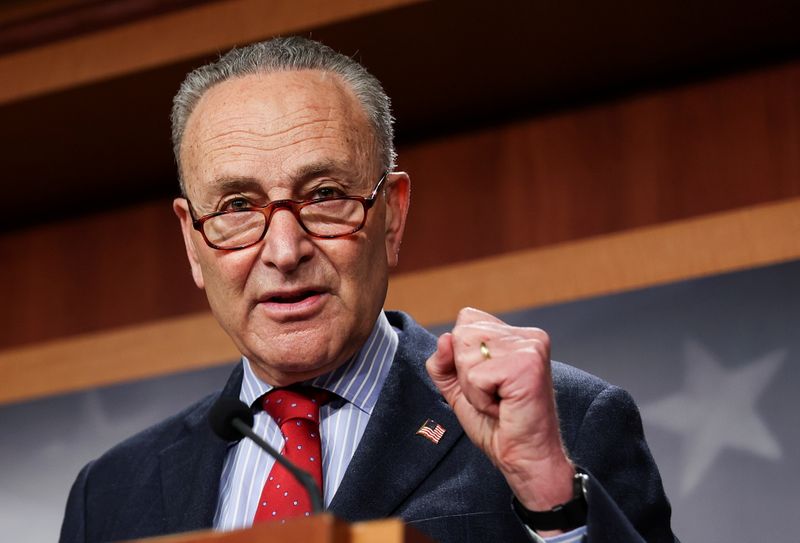 WASHINGTON (Reuters) -The U.S. Senate parliamentarian ruled on Monday that Democrats may use a procedural tool known as reconciliation to pass more legislation this year, a spokesman for Democratic leader Chuck Schumer said, which could clear the way for passage of an infrastructure bill without Republican support.

Spokesman Justin Goodman said that Democrats had not decided whether to use reconciliation, which they employed to pass President Joe Biden's $1.9 trillion COVID relief bill last month without Republican votes.

But Monday's ruling by Senate parliamentarian Elizabeth MacDonough means they can do so with just a simple majority in the Senate, by treating the measure as a revision of budget legislation. Doing so would bypass a potential Republican filibuster, in which legislation would need 60 votes to pass.

The Senate is currently divided 50-50 between the Democratic and Republican caucuses, but Democrats have control of the chamber because Vice President Kamala Harris can break a tie.

"The Parliamentarianâs opinion is an important step forward that this key pathway is available to Democrats if needed," Goodman said.

Biden last week proposed a $2 trillion infrastructure plan, which Republicans have said they would oppose.

Biden has said he wants to negotiate the measure with lawmakers from both parties. But he would be willing to push through the infrastructure bill without the support of Republican lawmakers in the absence of a bipartisan agreement, Energy Secretary Jennifer Granholm said on Sunday.

Senate Republican leader Mitch McConnell said last week that Biden's plan would raise taxes and increase debt, and he vowed to fight it "every step of the way."

Democratic Senator Ron Wyden, chairman of the chamber's Finance Committee, said he was pleased by the parliamentarianâs ruling.

"The American people want bold action to address our countryâs many challenges, and Democrats now have more options to overcome Republican obstruction and get things done," he said.