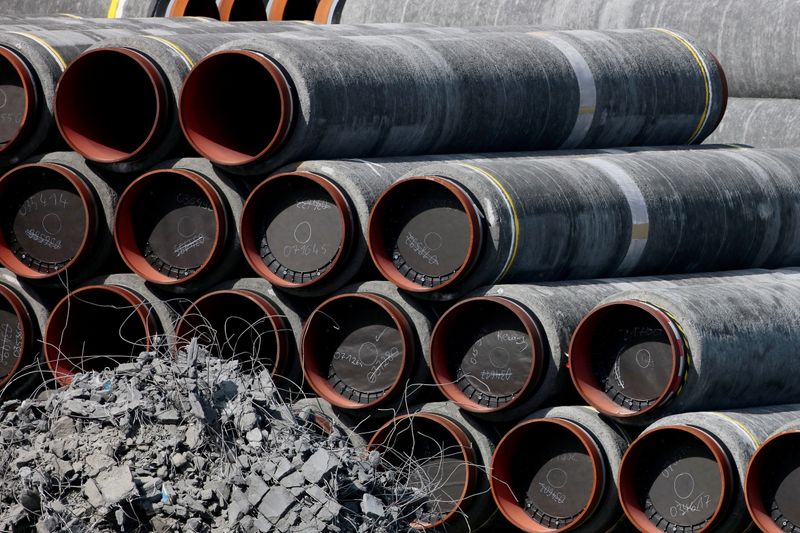 FILE PHOTO: Pipes for the Nord Stream 2 Baltic Sea pipeline are stored on a site at the port of Mukran in Sassnitz, Germany, September 10, 2020. REUTERS/Hannibal Hanschke/File Photo

WASHINGTON (Reuters) - The U.S. Senate Foreign Relations Committee advanced a bill on Wednesday to deliver aid to Ukraine in its struggle with Russia and pressure companies helping to build Russia's Nord Stream 2 gas pipeline that could deprive Kyiv of lucrative transit fees.

The Ukraine Security Partnership Act, which was approved by voice vote, authorizes $300 million in foreign military financing, of which $150 million would be subject to conditions. It needs to be passed in the full Senate and House of Representatives and signed by President Joe Biden to become law.

Ukraine is seeking international support in its standoff with Moscow over a buildup of Russian troops on its eastern border and in Crimea, which Russia annexed from Ukraine in 2014.

Kyiv and Moscow have traded blame for a collapse in the ceasefire in the eastern Donbass region, where Ukrainian troops have battled Russian-backed forces in a conflict Kyiv says has killed 14,000 people since 2014.

"Ukrainians have a right to choose their own future, and this bill contributes to that by supporting Western-style military reforms, lethal and non-lethal military equipment to defend itself from Russia, and U.S. diplomatic support for peace negotiations," Senator Jim Risch, the committee's top Republican, said in a release.

The bill contains an amendment from Republican Senator Ted Cruz that requires the State Department to determine whether 20 ships, including the Akademik Cherskiy, Umka, and Errieit, are subject to U.S. sanctions for helping to build the Nord Stream 2 pipeline, a project to bring Russian gas to Germany under the Baltic Sea. The determination is required within 15 days of passage.

The pipeline, led by Russian state gas company Gazprom and its Western allies, would bypass Ukraine, depriving it of billions of dollars in transit fees and likely undermining the country's efforts against Russian aggression. Biden has said the pipeline is a bad deal for Europe, but the project is about 95% complete.