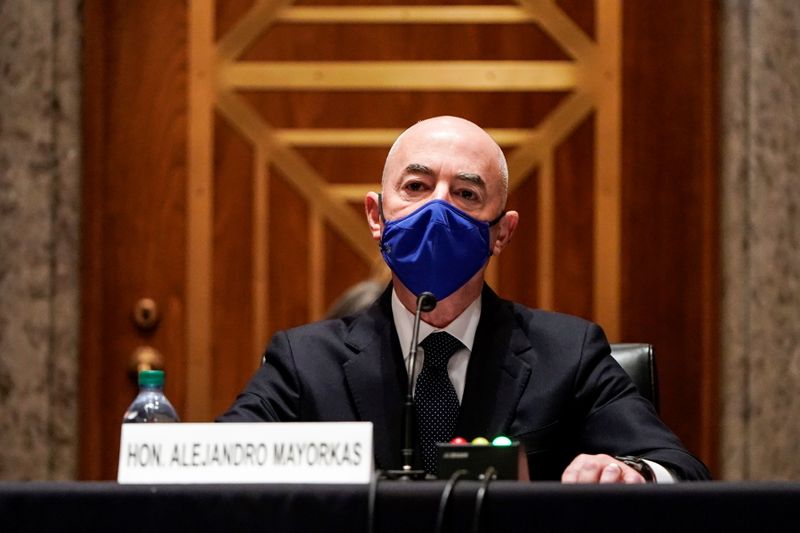 WASHINGTON (Reuters) -The U.S. Senate on Tuesday confirmed Alejandro Mayorkas to head the Department of Homeland Security, making him the first Latino and immigrant to hold the position and further solidifying President Joe Biden's Cabinet.

The Senate approved Mayorkas by a vote of 56-43 amid strong opposition from Republicans.

As secretary of the sprawling agency, Mayorkas will oversee a 240,000-employee department responsible for border security, immigration enforcement, cybersecurity and disaster readiness and relief, among other missions.

Mayorkas, 61, will also stand at the center of Biden's attempts to reverse many immigration restrictions put in place by Republican former President Donald Trump.

Mayorkas is the sixth of Biden's Cabinet nominees to receive Senate confirmation. Earlier on Tuesday, the Senate confirmed Pete Buttigieg to be transportation secretary.

Mayorkas takes the helm at DHS just days after the department issued an advisory warning of a heightened threat of domestic extremist violence from people angry at Trumpâs election defeat and inspired by the Jan. 6 storming of the U.S. Capitol.

During the confirmation process, Mayorkas had strong support among Senate Democrats, as well as the backing of four former DHS secretaries, the country's largest police union and many pro-immigrant activists. He was born in Havana and came to the United States when he was about a year old with his family, moving first to Florida and then California.

Some Republican senators raised concerns over Mayorkas' actions related to an investor visa program while working in the administration of former President Barack Obama.

"He does not deserve Senate confirmation to lead Homeland Security. Frankly, his record should foreclose confirmation even to a lower post," Senate Minority Leader Mitch McConnell, a Republican, said in a speech opposing the nomination.

A 2015 DHS inspector generalâs report found Mayorkas had intervened in cases involving high-profile Democrats, giving the perception he had provided preferential treatment to those people and related businesses.

A Biden transition spokesman said in November that the inspector general did not find any legal wrongdoing with Mayorkasâ actions and determined the decisions were âlegitimately within his purview.â