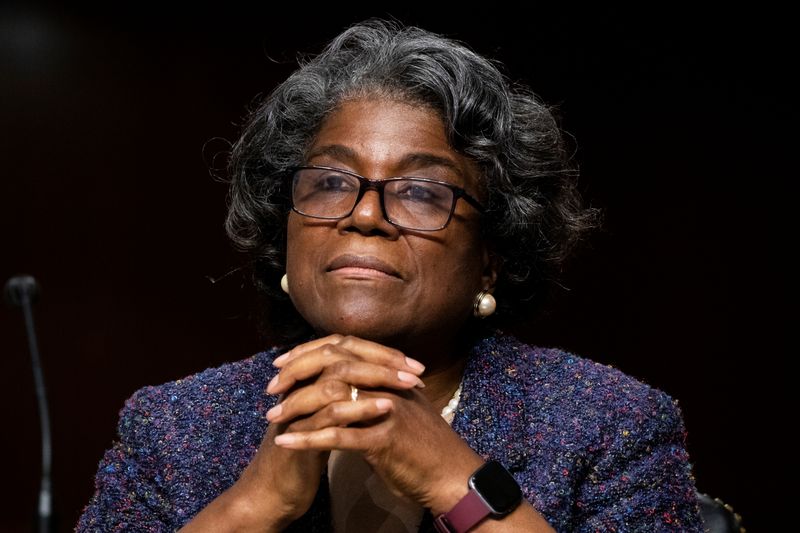 Linda Thomas-Greenfield attends the Senate Foreign Relations Committee hearing on her nomination to be the United States Ambassador to the United Nations on Capitol Hill in Washington, D.C., U.S., January 27, 2021. Michael Reynolds/Pool via REUTERS/Files

WASHINGTON (Reuters) - The U.S. Senate Foreign Relations Committee on Thursday backed President Joe Biden's nomination of veteran diplomat Linda Thomas-Greenfield to be the U.S. ambassador to the United Nations, steering her toward confirmation by the full Senate.

The committee voted 18 to 4 in favor of the nominee.

It was not clear when her confirmation would come up for a vote in the full Senate, which is currently debating COVID-19 relief legislation and due to conduct former President Donald Trump's impeachment trial next week.

The committee's vote was delayed by one day because of an objection by Republican Senator Ted Cruz, a vocal Biden critic who said he was concerned about a 2019 speech Thomas-Greenfield gave at a Confucius Institute, a center funded by the Chinese government at a U.S. university.

The committee's Democratic and Republican leaders said Thomas-Greenfield's experience - the 68-year-old has spent decades as a diplomat including as U.S. ambassador to Liberia - outweighed the impact of any single speech.

"I have no doubt that Ambassador Thomas-Greenfield is someone who is clear-eyed about the challenges we face from the Chinese government," said Democratic Senator Bob Menendez, who presided over the vote during his first meeting as the committee's chairman since the party took control of the Senate.

Risch voted for the nomination. "She's got an outstanding record. She's a good person, maybe too good a person," he said.